Times have changed. We are in  a time when we are experiencing mindfulness as a need.

In a wide variety of social environments, including education, healthcare, the workplace, even politics and, more recently, coaching, mindfulness is commonly regarded as an effective and adaptable practice. But, the meaning of being mindful has somewhat lost in just being stress free.

Mindfulness is not only for regular issues with self, but for the deliberate improvement of foundational skills, focus and connection, contributing to capacities you didn’t even know you had. At Coaching The Brain, we understand, practice and coach to be mindful.

Mindfulness is the essential human capacity to be completely aware or mindful of  where we are and what we are doing. In simpler terms it is to not be excessively reactive or distracted by what is happening around us.

While mindfulness is something that we all possess inherently, when we practise on a regular basis, it is more readily accessible to us.

We are conscious whenever we bring a sense of awareness to what we are feeling directly via our senses, through one’s thoughts and emotions. And, there’s increasing research showing that you are actually remodelling the physical structure of your brain as you train your brain to be aware.

One such journey which introduces you to your inner self is Mindfulness. Although, we sometimes come across words such as meditation and mindfulness, many of us are not quite conscious of the way our lives are changing.

Mindfulness means focusing on the present moment, without evaluating something or anything at all. Then, who would you think is a mindful person? How can you become one?

By being more mindful and aware of your thoughts and feelings, you may be able to teach yourself to live in the moment and enjoy life as it happens. Let us see how a mindful person is different from others. Here are a few things that mindful people do differently- 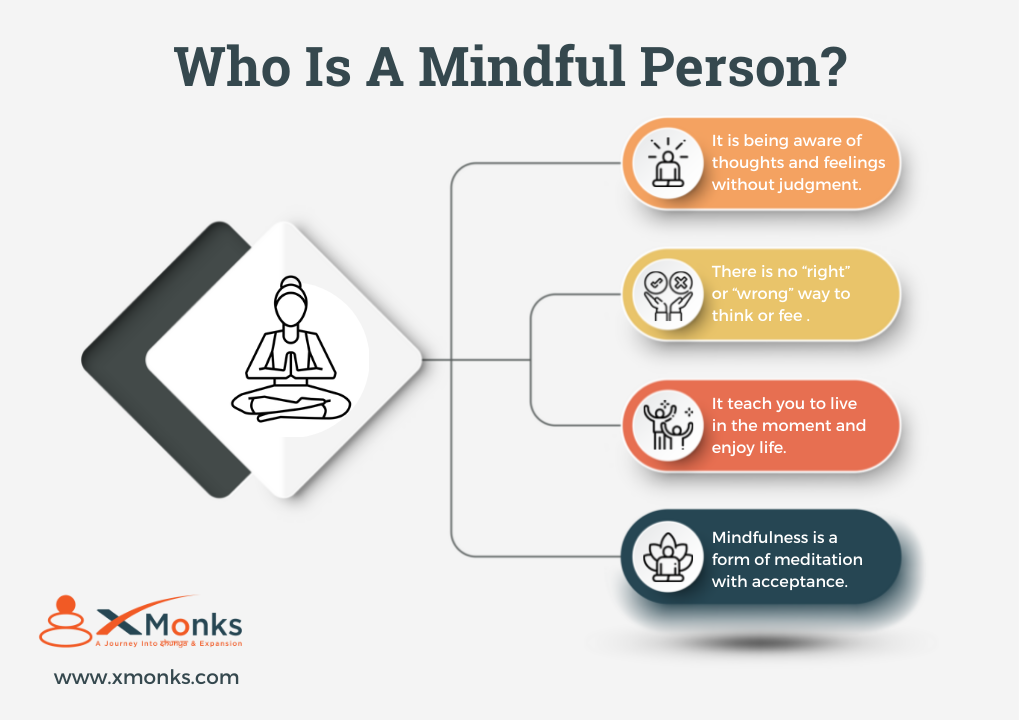 THEY DO NOT IDENTIFY OR DEFINE THEMSELVES WITH THEIR EXPERIENCES

The general belief is that non-attachment involves being able to step back from experience. So that things such as sorrow, pain, or rage do not become consumed. So far so good. Stepping back, as opposed to simply allowing something to be there and happen, becomes all about distancing yourself from your experience. This can cause many encounters, both pleasant and negative, to become cold, indifferent, and distant.

Disidentifying your experience or becoming unattached to it is not something you can do. Therefore, to grasp what it means, we have to comprehend its opposite and what it is not.

We strive to cling onto the good and avoid the negative while we identify with our experience. We “attach” a sense of self to the transient, changing phenomena of the unattachable. And in doing so, we can’t help but feel like it is something we need, lack, desire, want, whatever the experience is. Or the other way around, it becomes a problem that we need to stop, get rid of, eliminate, etc.

You establish a fixed sense of self that remains outside of the shifting flow and flux of conditions by attaching yourself to such transient and changing phenomena.

You will come to see yourself as a “happy” or “unhappy” individual, a “depressed” or “anxious” or “insecure” person, identified with experience. The more you criticise yourself and get caught trying to get rid of, refute, eradicate, or somehow change as things are, your identity solidifies. On the contrary, being not identified or attached to an experience, without judging or responding to it, enables your identity to be as it is and appear in entirety.

Such a state comes only with practise. Some of the most animated, happy, impassioned people around are actually extremely aware people. Do you know why? Because unlike general notion, they spend time experientially to understand what it’s like to really be with the knowledge they can gather from that particular episode. They do not get stuck. Their mindfulness is reflected in their ability to come out of the situation.

THEY DO NOT FIGHT THE SITUATION TO BE CALM

Usually, doing tasks is cognitive-heavy. They are classified as being focused on logical processing and attempting to get from one position or condition to another by applying effort. This style of doing is perfect for doing stuff in the external world of physical locations and individuals. But it’s just as pointless as a slap on the chops when it comes to the internal and eternal realm of perceptions and emotions.

This thinking and effort-centered style of operating can become our norm when overused.

But trying to relax the mind with effort, like a dirty puddle of water, is like jumping in there and splashing around. It could give you the illusion of clarity temporarily, but overall, it will just mix things up and murk the water even further. The only way to clear it up is to allow the water to settle first. That means not messing with it by attempting to fix what’s wrong, telling it to shut up, or keeping standards like it should be quiet even though you had six coffees and two hours of sleep.

The mind is not any different from the body when it comes to exerting control.. They are inextricable. But when the mind is caught up in rumination, you can’t see this by definition. As if it was a dilemma to be solved, the mind is trying to alter the perception. Your brain can’t see that it is causing the problems itself, much like muddying up the water by splashing in it.

Self-aware people realise that their mind is just an overused function through sitting and being with themselves and their experience. They recognise that you can’t use the mind to calm the mind, so they want to allow the waters to settle before they react or act.

THEY UNDERSTAND THE EVER CHANGING NATURE OF LIFE

Nothing lasts forever in this world. A thoughtful individual stays in the present moment, and he knows that. There are no future questions and no regrets of the past. A diligent person knows all things are coming and going. Glory will come and go, and sorrow will come and go. Therefore, they just live now, and that makes a lot of disarray apparent.

THEY DO NOT KILL FOR PERFECTION

Life and existence are imperfect because, as we know, there is no ideal of “perfection.” And so you can waste all our efforts and time striving and tightening up, but you will never get there.

To say that we should not thrive for perfection might sound like a buzzkill. But the thirst for perfection won’t end with you fleeing to the countryside and doing nothing about your life. No, a mindful person is not a hermit.

Mindful people do not worry about the outcomes. If they hit a dull point, they would rather just want to enjoy the trip on route. Mindfulness coaching is thus helpful to make an individual understand where to be resilient and where to act as a spectator. To make one freer to simply give up but with a lesson of growth.

Similarly, a conscientious person is not just lying back and happy with imperfection. They agree that we generally do not think of perfection; but the imperfection in the universe and the continuous and constant development movements are how we find it closer with what is.

“Everything is created twice, first in the mind and then in reality.”

― Robin Sharma, The Monk Who Sold His Ferrari: A Fable About Fulfilling Your Dreams and Reaching Your Destiny

Mindfulness is the practise of keeping your attention on the present moment consciously and embracing it without judgement. Mindfulness is now being clinically studied and has been discovered to be a crucial factor in minimising stress and overall satisfaction.

These are indeed a few minor things that conscious people do differently that make a really positive difference in their lives. Meditation and attention should still be practised at home. However, you can still contact a coach if you have any issues and need expert guidance. The mindfulness coaching practitioners at ‘Coaching The Brain’ acknowledge that it is difficult for a mindful person to have one general entity. They can be calm and sweet, of course, but it is not possible for everyone to obey any code or dogma.

One cannot learn mindfulness just like a language or an ethical code which you can learn from a book. You have to explore it by practising it. It’s something you have to encounter directly, if you really want to understand. Read about techniques to attain mindfulness next here.

The True Essence of Acceptance

Previous
Techniques to be Mindful: A word by and for the Coaches
Next
Neuroscience of Emotions and Values