Neuroscience of Emotions and Values

The ability to touch on what is important to you and connect to this emotionally for energy and motivation.

Our existence revolves around our emotions and so does our goals. Seems like an absurd equation? Let us look at a very common instance. The day you wake up cheery, you seem to feel more productive. By the end of your day, a sense of satisfaction kicks in. On the contrary, on days where nothing seems going good, things begin to look like a slump. In our daily lives, it is not just about waking up happy or sad, sometimes it’s anger and jealousy. The point here is we are regulated by our emotions which thus impact our actions.

With the rise of neuroscience in the 20th century, understanding the biology of the brain and how it functions became important. In this area, studies have confirmed that the brain itself is ultimately related to human behaviour and have contributed to the development of specialist areas, such as neuropsychology.

Are we slaves to our emotions?

Emotions only influence us to be the kind of person we want to be.Now why do you have all of this to worry about? The arguments aren’t significant to your own life? It’s a discussion between scientists and  philosophers. If consciousness is described this way or that way, what do you care about?

Yes, the one may never know what derives the desires in them. Often it can be disappointing to find that situation may not be to our best leading assumptions or appreciated thought. And the effects can be bad, if not entirely bitter. When anything important is overlooked by downplaying the reality of the body or casting it as an extension of processes in the brain. It is directly linked to YOU and your thoughts and beliefs and feelings. The most probable deep effect  is that when feelings are hurt for long; they get shunted inside.

Feelings are temporary that are induced by emotions. When we dream, we have all sorts of experiences? We get scared, terrified, angry, happy, shocked. Literally, our interpretations are in our heads; they are just neural patterns. We recall feeling happy, scared, annoyed, caring, desirous, guilty, nervous, or some other mixture of feelings after waking up that we may or may not have articulated in the dream. But have we ever felt those feelings? Maybe not. They are incredibly detailed reproductions of the actual reality. They are imitations or exteriors, not in the way that we use the word, but are definitely not emotions, nor they are feelings.

A coach would help you befriend the emotional body inside your physical body. The guidance of a trained coach in the development of emotional intelligence is uniquely successful. The ability of a coach to provide realistic, but highly personalised guidance and assistance creates a profound difference in creating positive progress.

The lens of the brain is gradually visible to emotions, which is the phenomenon of the body. And a short shrift is granted to your body. That alone is not shocking, since neuroscientists look and are concerned mainly with the brain through their specialty. But when we are distressed, happy, lusty, enraged, lonely, guilty, shocked, or scared, the palpable reality of what happens in our bodies is relegated to an afterthought. Neuroscientists are intrigued by the brain’s work, and as a result of brain activity they take care of the body. The servant yoked to his lord, the loyal companion, are the emotions. 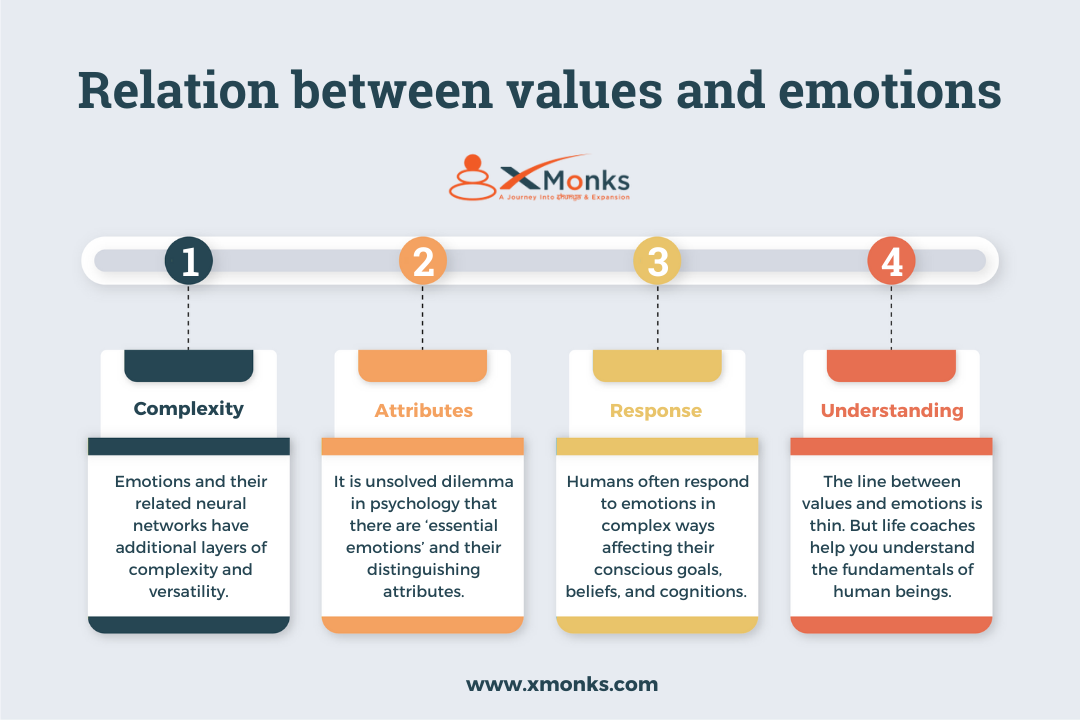 The relation between Values and Emotions

Most of the time we are in denial with ourselves. A good person cannot reflect an angry emotion. No! it is time to stop that thought process. Accept your emotions. Tell yourself why you feel it. Ask yourself what are your trigger points.  It will help you understand yourself and that will lead to the search of the core values.

In the movie, an angry young man gets the deed done. Yet he is seen as a hero. Do people hate him for revenge? No, because the core of that hero figure was of a just human. Again, back to the anger violent part. All he did was to channelise his emotions towards the end target. Emotions which were a result of the core values imbibed in his heart.

In humans, emotions and their related neural networks have additional layers of complexity and versatility. Humans often respond to these emotions in complex ways, so that conscious goals, beliefs, and other cognitions affect behaviour in addition to emotional responses. It is a long-lost and still unsolved dilemma in psychology that there are so-called ‘essential emotions’ and their distinguishing attributes.

Deep improvements in moral character following brain injuries were observed in humans during the nineteenth century marked the start of modern moral neuroscience. These findings led to the idea that certain parts of our brains are needed to permit moral belief systems, emotions, reasoning, intelligence, and comportment.

Often it is tough to differentiate the values, emotions and feelings. Of course who could we blame? The line is so thin it almost feels they are overlapping each other. But, we can with the help of life coaches understand the fundamentals of human beings and empower ourselves.

The coaches at “Coaching the Brain” are well versed with the emotions and can explain how to recover from the aches, pains, pressures, insecurities, glories, disputes, repressions, affections, worries, and exaltations. They help you understand your body, which is the foundation of yourself that is lost in that process. They understand unexplained feelings and interactions between people or groups. And they individually and effectively establish meaningful relationships. For that matter, anything that makes a successful leader, team member, or parent and spouse. Register for the course today at www.coachingthebrain.com.

Neuroscience of emotions is the study of the neural process of emotion. This interdisciplinary area blends neuroscience with the psychological study of personality, emotion, and attitude. The emotions affect us only to be the kind of individual we would like to be.

How does neuroscience and values go hand in hand?

It is also difficult to distinguish between values, thoughts and feelings. Of course, who should we blame for that? The line is so thin that they almost feel overlapping, this is where neuroscience and values come into play. In fact, however, the reason why so much emphasis is put on values is that people’s behavior is deeply ingrained in their values.

What is Neuroscience Psychology?

The study of how the nervous system works, its function, and what it does is neuroscience, also identified as Neural Science. The brain and its effect on attitude and cognitive abilities are the subject of neuroscientists.

How does human behaviour impact emotions?

Our perception of complex emotions and behaviors has been enhanced by developments in neuroscience, offering useful insights that we can apply to our everyday lives. Human behaviour differs from emotions, but is affected very deeply by them. As in the case of violence, feelings may also directly influence our behaviour, our behaviour is concentrated on harming the other individual.