The Science Behind Mindfulness

Home » Blog » The Science Behind Mindfulness

Mindfulness-based stress reduction programs are the core of any mindfulness coaching session. Many researchers have propounded the theory that with mindfulness training, the ability of the brain to process a situation increases efﬁciently. This study is a glimpse into the possibility of upgrading the operating efﬁciency of our brains with mindfulness meditation. So if your job depends on your ability to pay attention to information for a prolonged period of time, (wait, that’s good for everyone) maybe this mindfulness training is useful for you.

A Study of Brain After Mindfulness Training

A 2014 study by Zeidan, et. al. took snapshots of brain activity using FMRI technology. These snapshots show that, during periods of anxiety and stress, the prefrontal cortex (PFC) and anterior cingulate cortex (ACC) tend to be deactivated. These parts of the brain are involved in self-regulation or the ability to exert some voluntary control over our thoughts (such as worries) and emotions (such as anxiety). They also found that the posterior cingulate cortex (PCC) was highly activated during anxious states. This part of the brain is associated with mind wandering and self-referencing. Interestingly, after 20 minutes of mindfulness meditation guided by an experienced and trained facilitator, the PFC and ACC showed greater activation, the PCC was deactivated, and state anxiety was significantly reduced.

In a study of unemployed people who were looking for a job (Taren, et. al., 2015) and who were provided a 3-day intensive mindfulness meditation training intervention, FMRI studies showed:

The Default Mode Network (DMN) is the circuitry in our brain that’s active when we are self-referencing, making judgments, and thinking about the past and future. These functions become problematic when we get stuck in ruminating and worrying, being overly self-critical, or getting caught up in judging and blaming – factors related to a number of mental health disorders. Meditation is correlated with reduced activation and functional connectivity of the DMN (Brewer et. al. 2011). When the DMN is quiet, the Task Positive Network (TPN) is engaged, focusing attention on the present moment, such as when we meditate on the breath or other body sensations. With repetition, we learn how to switch out of doing into being mode, interrupting painful patterns of thinking and behavioral habits that cause us stress.

What Happens to the Brain During Meditation

Neuroscientists have studied mindfulness and discovered that meditation actually changes the physical structure of the brain. The Observer reports that when Harvard Medical School scientist Sara Lazar was skeptical about her yoga teacher’s claims about the benefits of meditation, she used MRI technology to find proof. Surprisingly, she observed that meditation can help us stay sharper as we age.

The frontal cortex, which is the part of the brain associated with memories, typically thins out as we age. The brain scans revealed that older meditators had the same amount of gray matter in their cortex as their younger counterparts.

In another study, the Harvard neuroscientists observed people who had never meditated before as they went through an eight-week mindfulness training program. The results demonstrated that mindfulness activates the parts of the brain related to memory storage, empathy and emotional regulation, as evidenced by an increase in brain volume in the hippocampus and temporoparietal junction. At the same time, meditation reduces activity in the fight or flight survival instinct part of the brain (amygdala), which triggers stress hormones.

According to Greater Good Magazine, long-term, consistent meditation makes people more resilient because it reduces the inflammatory response in people when they are exposed to stressors.

There are certain inflammatory markers for depression and anxiety that you can measure in the blood. For individuals who are meditating for a long time, meaning for more than a year or two years, those inflammation markers go down in the blood.

While there is science behind mindfulness meditation, some studies have shown mixed results. For example, according to Greater Good, a study showed that a mindfulness program for adults had no impact on depression or anxiety in teens. Many other studies were inconclusive about the benefits of mindfulness practices.

We would have loved to give you all scientific backing behind the claims. But there is not just one. For references check this link. 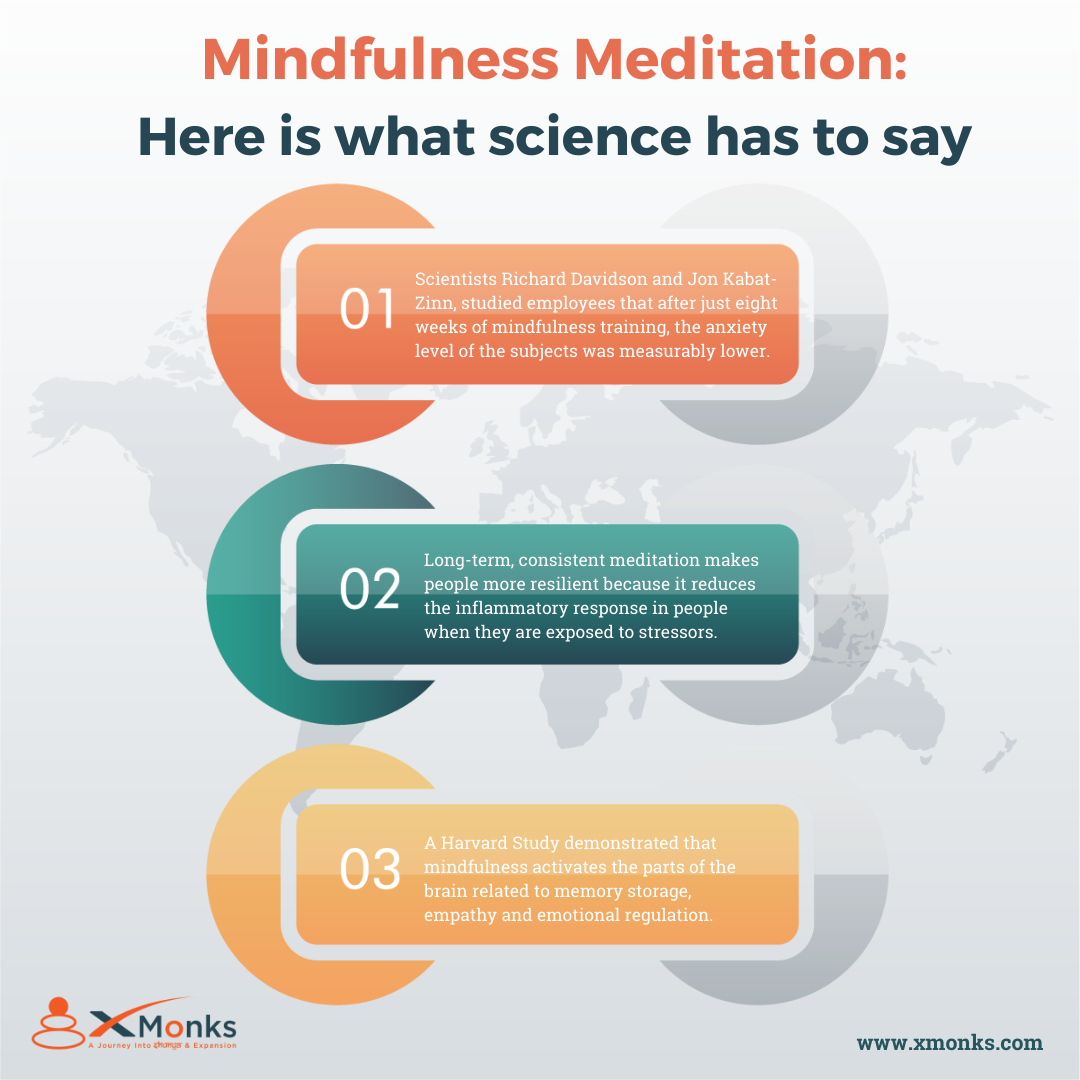 So why are mindful practices so effective in brain training and keeping you happy and effective at work and at home?

Because mindful practitioners are so used to inquiry, we have also become very comfortable with science and scientiﬁc inquiry into mindfulness itself. The best example of this comfort with science was when the Dalai Lama said, “If scientiﬁc analysis were conclusively to demonstrate certain claims in Buddhism to be false, then we must accept the ﬁndings of science and abandon those claims.”

One big issue is that not everyone is motivated to do brain training exercises. For many people, it’s difficult to sit still for several minutes. And as a coach it is their craft to make the coachee sit through the process.

With this in mind, let us conclude with a  quick glance at some of the peer-reviewed scientiﬁc literature surrounding meditation. Scientists Richard Davidson and Jon Kabat- Zinn, pioneers in the ﬁeld of contemplative neuroscience, studied employees of a biotechnology company. The study showed that after just eight weeks of mindfulness training, the anxiety level of the subjects was measurably lower. When the electrical activity of the subjects’ brains was measured, the mindful group showed signiﬁcantly increased activity in the parts of their brain associated with positive emotions.

Mindfulness is an exercise for training the brain. It’s not only about carving out a few moments of peace in your day. Just like the benefits of physical exercise extend beyond your sweat session, mindfulness has lasting benefits. Like many other skills, meditation is easy for some people and challenging for others. But like any other skill, it takes practice and dedication.

What is the impact of mindfulness on the brain?

According to research, practising mindfulness may cause the grey matter in your brain’s amygdala – an area known for its function in stress will shrink.

What is meditation coaching and how does it work?

Meditation coaching combines meditation, coaching, and energy therapy to assist others in their journey of self-discovery and goal-setting.

What is mindfulness coaching ?

Where mindfulness and coaching collide is mindful coaching. We learn to transition from doing to being as we practise mindfulness.

What is mindfulness training and how does it help with mental health?

Mindfulness training, which include techniques such as meditation, breathing, and yoga, are ways of paying attention to the present moment. People who receive training become more conscious of their emotions, feelings, and body sensations, allowing them to better control them rather than being overwhelmed by them.

What are the benefits of mindfulness training?