It is difficult for us to let go of our thoughts, but sometimes the more we want to suppress , the louder it becomes. Mindfulness teaches how to  shift the focus to a single point of reference, such as one’s breath or bodily sensations, or a word or phrase known as a mantra. The practise has been shown to minimise distraction and rumination, make it easier to let go of negative unconscious thoughts, and encourage greater enjoyment of the present moment.

Meditation has proved to alleviate anxiety and encourage calmness. Particularly when it is done in combination with mindfulness activities that keep people grounded in observing the moment. It can also help individuals identify and embrace negative emotions. When the meditator has social support, such as in a formal group setting or with the aid of a friend or family member, it can be especially effective.Specially in a coaching environment.

Mindfulness has moved to popular psychology and medicine, becoming a pivotal clinical technique; it has been incorporated, among others, into Mindfulness-Based Cognitive Therapy, Dialectical Behavior Therapy, and Acceptance and Commitment Therapy.

In the research by Brown, K. W., & Ryan, R. M. (2003). The benefits of being present: Mindfulness and its role in psychological well-being [Journal of Personality and Social Psychology], very positively backed up the notion that mindfulness is related to emotional and physical well being. The research sampling study shows that both dispositional and state mindfulness predict self-regulated behavior and positive emotional states. Finally, a clinical intervention study with cancer patients demonstrates that increases in mindfulness over time relate to declines in mood disturbance and stress.

We have already talked about the healing aspects of mindfulness. 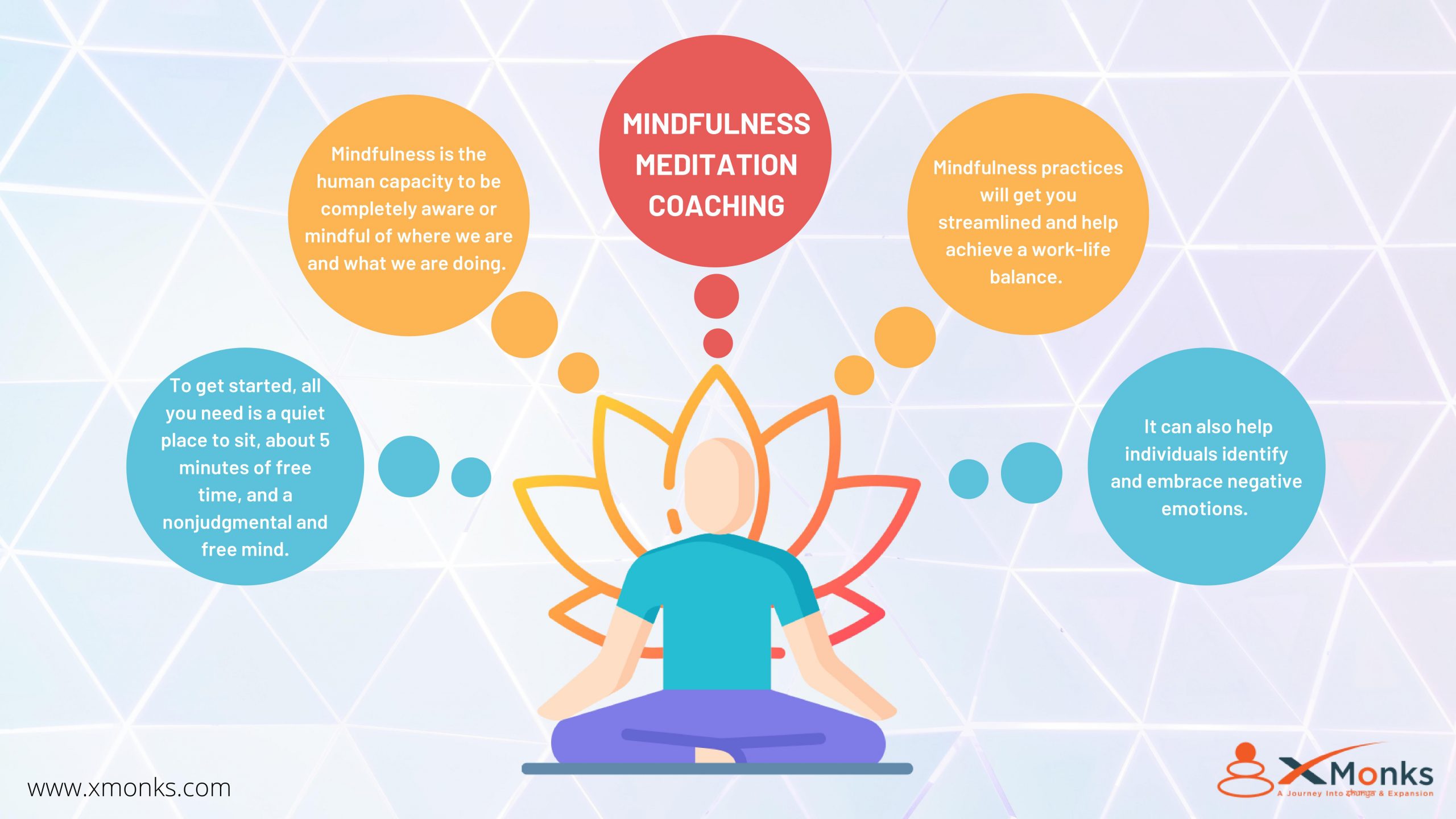 Getting started with Mindfulness Meditation

Mindfulness meditation, which has proven effective in coping work related problems, is easy enough to do by yourself, however an instructor or a programme will assist you in practising it. If you are an office personnel, register at www.coachingthebrain.com today! And get in touch with our coaches.

Mindfulness methods can vary, but in general, meditation on mindfulness requires breathing practise and body and mind awareness. Mindfulness meditation doesn’t need any tools or training. To get started, all you need is a quiet place to sit, about 5 minutes of free time, and a nonjudgmental and free mind.

Different religions as well as secular components around the world have equally accepted Mindfulness meditation. Although the ways of meditation varied from place to place, it was never dismissed as mere hocus pocus by anyone. Its effects are so strong that if meditation is practised long enough, the inner architect of the human brain is changed. In particular, this induces changes in the symmetry of activation in the prefrontal cortex. Previously, these changes were believed to be triggered only when the positive results take over to speed up recovery from a traumatic event.

With this donkey race of the modern world, people need coaches. They need for work, to lead, to have peace at home. Altogether it is their need to get their life together. You can serve a purpose to bring them to a better state of mind. Check out our upcoming events here.