The ability to sort out your thinking and then drop forever the frustration of trying to work around limiting ideas.

Beliefs are our brain’s way of making sense of our complicated universe and  managing it. They are mental representations of how our brains expect objects to behave in our environment. They tell the brain how things should be connected to each other, the patterns that our brain expects to adapt to the world. Beliefs are models for successful learning and are also necessary for survival.

The brain seems to be a value energy-organ and thus, needs to establish efficiencies that conserve our energy. As a forecasting system, it takes shortcuts to identify trends, as it analyses the huge amount of information obtained by its sensitive organ growth from the environment. Beliefs allow complex knowledge to be distilled by the brain, allowing it to categorise and analyse information easily and to leap to conclusions.

Understanding how beliefs are shaped and how they form the foundation of future attitude and habits, is relevant because it can help to understand social phenomena such as bias and bigotry, aiding and violent behaviours. The most fundamental form of social understanding is always in general beliefs.

Beliefs are critical pillars for behaviour and attitudes. Sometimes even in the face of unconfirmed facts people will passionately uphold their convictions. This tendency is known as perseverance of belief. Perseverance of belief usually exists when individuals base their convictions on knowledge that they find in some way rational, persuasive, or desirable. Therefore, even though convictions are apparently disconfirmed by new evidence, there may still be the basis for what the individual believes. At times, because of the residual encouragement of the explanation behind it, the conviction will still be preserved.

Beliefs can also form the basis of behaviour.

The behaviour is predicted by several types of beliefs:

(b) Beliefs about personal vulnerability

(d) Beliefs about whether the necessary behaviours can be enacted 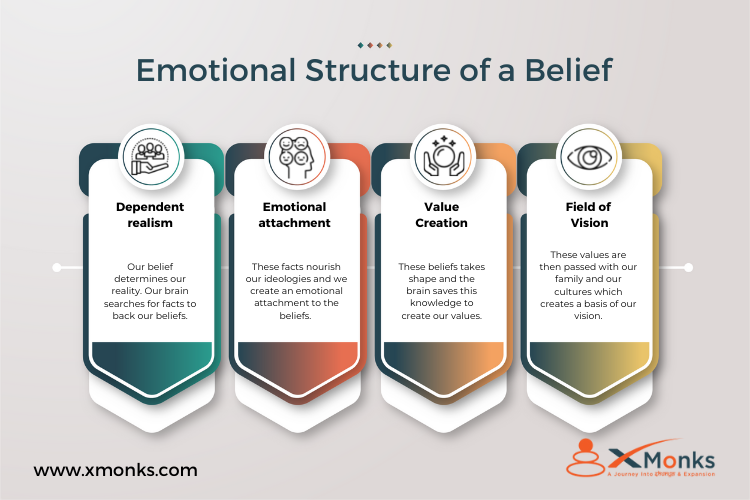 Emotional Structure of a Belief

The brain often tries to find sense in the knowledge that pours into it as a ‘belief engine’. When a perception has been established, the brain rationalises it with arguments, almost always following the case. The brain is therefore invested in beliefs and strengthens them by searching for facts while blinding itself to something that is contrary. This process can be called “belief-dependent realism” — what we believe determines our reality.

Our minds take the facts and shapes them to strengthen our ideologies, and to be firmly held, those beliefs don’t need to make sense. It’s a relationship that has both advantages and disadvantages, but it takes an understanding of how we develop emotional attachments to those values to recognise when it’s helping and when it’s doing us a disservice.

Via observation, some of those early beliefs shape. The brain saves the knowledge differently as you create your values, whether they have emotional tags, so that it is more usable and impactful.

From our families and cultures, who convey many of the basic ideas that form how we see the world, other values are passed along to us. Evolutionarily speaking, we are herd animals, and going along with the crowd has an advantage. In essence, such communities ideally find their way through our most fundamental definition of who we are.

It might sound better than the alternative to our propensity to stick to our values, but that doesn’t mean it is in our best interest. Our primary strategy of self-defense is to minimise the danger and stop something that might threaten our worldview, which is how so many of us end up living in a feedback loop, surrounded by others who hold the same beliefs. Only our dependence on social media exasperates the impact.

Most of our identity is social, and common values are the foundation for so many of our social relations. In the end, for reasons that are as realistic as they are emotional, most individuals find it easier to preserve both their existing values and their social circle than to accept a dramatic value change.

How to work with our beliefs

Belief can make individuals do the oddest things. It provides a moral structure at one level, sets preferences and steers relationships. It can be catastrophic, on the other hand. Belief may manifest itself as bigotry or in the name of a political cause, convince someone to blow up themselves and others.

This is transforming. Formerly the domain of philosophers alone, for many psychologists and neuroscientists, belief is increasingly becoming the topic of preference. Their aim is to create a neurological model of how beliefs are made, how people are influenced and what can be manipulated by them.

Understanding belief, even for the seemingly easiest of human experiences, is not a difficult feat. Take a conversation between two individuals. When one speaks, the brain of the other is processing information at a phenomenal pace through their auditory system. The beliefs of that person serve as receptors for the massive influx of sensory input and direct the response of the brain.

Beliefs also provide stability. When a new piece of sensory information comes in, it is assessed against these knowledge units.

So, what are we missing here?

The issue mainly faced by people who invest their beliefs in the goals are at times when they cannot grow beyond a pre-existing belief. They want to change. They need to envision a better life.  What makes changing belief so difficult?

There is no other person in the world to answer the aforementioned question to full extent than a Coach. The most challenging task in the initial stage of coaching is to break the belief cycle. For setting the tone of the session, they have to hit it right in the target which is to realize the audience how their beliefs are hurdles. When asked, the following reasons were mentioned by the coaches.

Reason 1- Personality Based on Belief

In certain cases individuals have personally invested a lot in their value system. They may have staked their legitimacy on a single belief. Not infrequently, individuals build their entire life around a belief. And this investment may go well beyond a sense of self, extending to major investments in material and financial terms or a career in life. For such an individual, a change of belief will obviously entail a colossal upheaval and may involve unbearable personal losses.

Reason 2 – Belief as a concept of life

The way our values are too frequently entangled with how we identify ourselves as individuals, our self-concept, is another significant factor responsible for resistance to changing our beliefs. In reality, beliefs are connected to a part of the brain that is entirely interested in self-representation. We want to believe like with our actions aligning with our values, we are consistent. We are continuously trying to rationalise our own behaviour and values and trying to create a consistent picture of ourselves. In a number of ways, it is humiliating and most often painful to admit that we are essentially incorrect.

Changes in behaviour occur when people believe that a specific action leads to negative, likely consequences that could be stopped personally. We do not want to make it tough for you to understand by using long jargons. A coach will assist you in cultivating a mindset parallel to your resistant brain in simpler terms.

This way, we will also learn to judge the advantages of our convictions objectively. And if we find out we were wrong about something important; we might experience an exhilarating feeling of exploration. Maybe it’s time to stop talking about faith and conviction admiringly, as if these were ideals.

The revolution in our awareness of the potential of the brain to transform far into adulthood does not stop with the fact that the brain can and does adapt. The discovery of how the brain changes is similarly groundbreaking. The coaches at “Coaching The Brain” demonstrate how the behaviours we take can actually expand or contract various regions of the brain. The coaches will take you on a journey of ease and simplicity to cultivate the ability to break the cycle of beliefs and to change and concentrate your attention on something else. These are all attributes of the well-ordered mind, as we shall see. That is a mind that can concentrate and pay attention and is structured. A mind which in a tumultuous sea of transition, can remain afloat and buoyant.

Neuroscience of Beliefs  are our brain’s way of making sense of and controlling our complex world. They are conceptual simulations of how our brains expect our world to interact with objects. They instruct the brain how things are linked with each other. Beliefs are essential for successful learning and are important for survival as well.

What is neuroscience of religious belief?

The neuroscience of religion, also known as neurotheology and spiritual neuroscience, aims to describe religious experience and action in neuroscientific terminology. It is the observation of associations between neural phenomena and subjective spirituality experiences.

What are the benefits of neuroscience?

The benefits of neuroscience are uncountable, but to name a few here are they:

1. Studying the nervous system increases awareness of our fundamental biology and the functioning of the body.
2. Understanding how things usually work will help shed light on what can happen when problems arise.
3. It can help the researchers find ways to avoid or treat brain, nervous system, and body disorders.

What does cognitive neuroscience of belief mean?

Cognitive neuroscience of belief is a neuroscience sub field that examines the biological processes underlying human cognition, especially in terms of the relationship between structures of the brain, behavior and cognitive functions. It is an interdisciplinary field of research that integrates the brain’s activity assessment with the simultaneous performance of human cognitive tasks.

What does neuroscience of false beliefs mean?

The neuroscience of false beliefs is based on a false-belief interpretation that is the understanding that an individual’s belief or representation of the world can be contrary to reality.

Previous
Neuroscience of Emotions and Values
Next
Coaching Skills for Leaders