Who Is Your Role Model? A Guide To Choosing Your Inspiration

Home » Blog » Who Is Your Role Model? A Guide To Choosing Your Inspiration

According to a popular legend, once upon a time, Young George Washington chopped down a rare and beautiful cherry tree for reasons that were never completely explained. When his father found out what he’d done, he was furious and confronted him. Young George bravely said, “I cannot tell a lie… I did used my hatchet to cut it.”

This story has been passed down for many years to demonstrate that Washington was a man of integrity who served as a role model for many of us.

In reality, role models are just other human beings who teach others how to live a life of integrity, optimism, hope, determination, and compassion. They play an important role in our personal development. But isn’t it ironic that even though they are someone we look up to they are just circus monkeys who are trying to drive people?

It is like the classic example, you planted a mango tree and a coconut tree together. The coconut tree grew big and straight, and the mango tree saw, “Oh! I want to be just like him “and chopped off all of his own branches until he was left with only one straight branch.

Who Is Your Role Model?

Have you ever noticed a child, they imitate what they see. Often it is seen that young children imitate their parents or their siblings. Their small eyes observe and zero in on us almost unconsciously, working in actions, mimicking gestures, and internalising words, expressions, and even roles. It is natural that children can never be identical replicas of their parents, yet they try to imprint.

This is something that has always been obvious in the field of developmental psychology. Albert Bandura, a well-known social psychologist, has written extensively on one of the basic principles of social learning, “modeling.” According to him, people learn by mimicking the actions they see around them, the social models with whom they grow up or interact.

But why do children do this? They want to be like their parents. It gives them a sense of purpose and belongingness. Not only do kids do this but we adults do it too, for the very same reason, for the sense of belongingness.

So asking again, who is your role model? Who gives you that sense of belongingness? Is it your parents, your coach, your friend, a leader, or some celebrity?

Though the term “role model” was coined in the twentieth century, people have been aware of the concept for a long time now.  A role model is someone whose actions, examples, or accomplishments are or can be emulated by others, particularly younger people. Effective role models have appealing characteristics that make them easy to admire. They motivate others to make changes and pursue new objectives.

The term role model was coined by sociologist Robert K. Merton, who proposed that people compare themselves to reference groups of people who occupy the social role they aspire to. He discovered that people tend to mimic groups of behavior rather than individual acts, according to research. People that fill specific roles in society exhibit these patterns of conduct. One common example is how young fans idolise and copy professional sports or entertainment performers.

Albert Bandura, a psychologist whose work on learning led to the development of social learning theory, is another social scientist whose work is applicable here. He discovered that people are drawn to be observers of their surroundings. During these observations, people take note of the other’s behavior and feel free to copy it. This mimicry is part of a more involved process of analyzing the source and effect of the behavior in the issue. Though it may not appear to be real, it paved the way for new research and understanding of how good role models can be used to promote desirable behaviors and social change.

Thus, a role model is someone that other people look up to for guidance on appropriate behavior. Role models can be both, either positive or negative. Positive role models demonstrate a variety of useful or beneficial activities. On the other hand, negative role models provide instances of destructive or disruptive actions. Having them in our lives encourages us to make the most of our time. Now, let’s understand why role models are so important in our lives.

Qualities of A Good Role Model 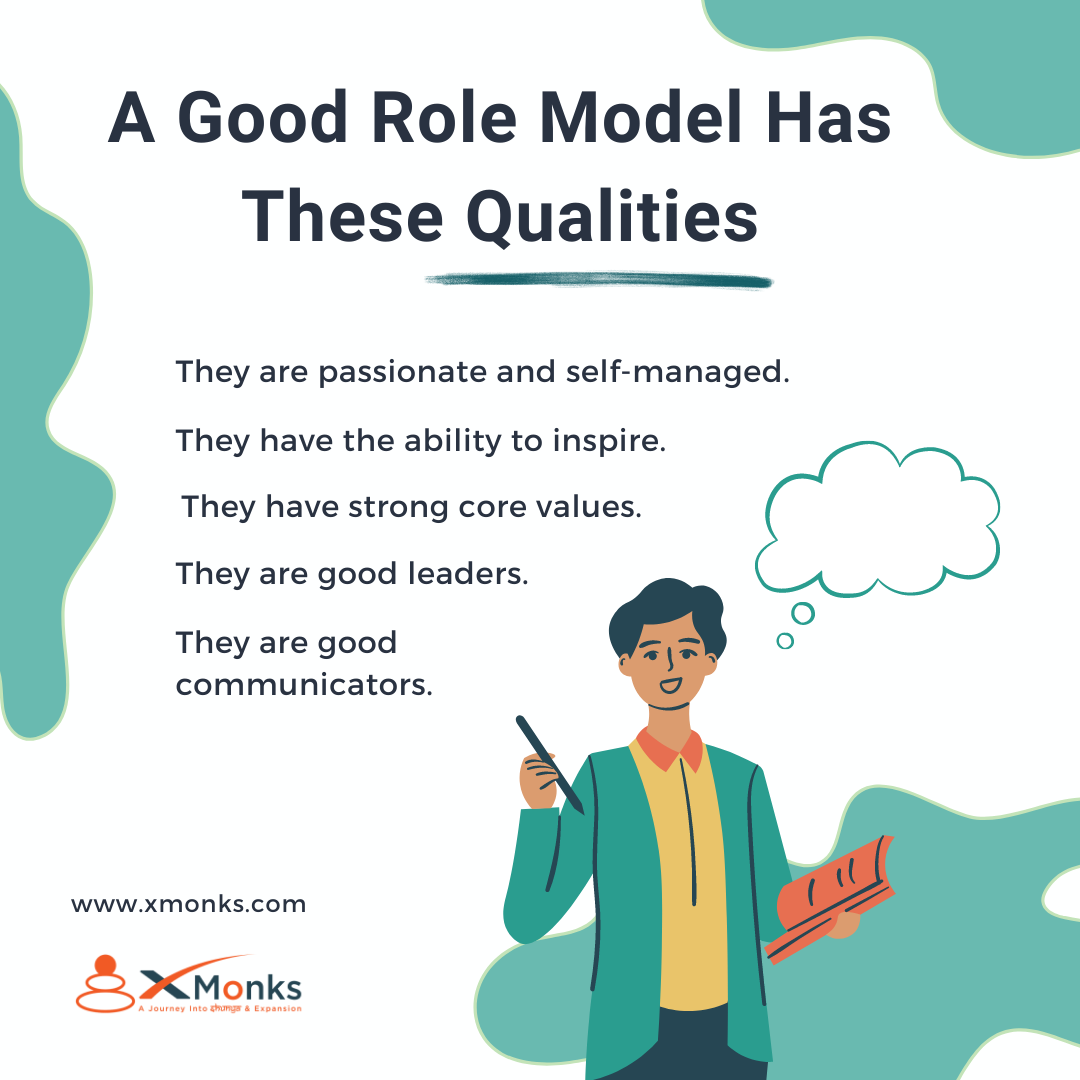 The world has been led by exemplary figures. There have been innumerous game-changers, leaders, and problem-solvers. But can each of those faces fit as a good role model?

Not everyone can be your guru. That choice you have to make yourself. Here are some qualities that make a good role model.

Like I already said, a role model can be anyone. They can be someone we look up to and copy, such as a parent, teacher, sibling, leader, celebrity, cousin, or uncle/aunt. Some of us may do so on purpose, while others may do so without realising how much we are impacted by them.

The biggest challenge is putting together a list of inspirational role models and in deciding who to include. It’s difficult to choose because there are so many people who have done heroic things in so many various sectors, such as human rights, science, and fighting evil. But to help you understand better, here are a few role model examples.

“Parents are the ultimate role models for children. Every word, movement, and action has an effect. No other person or outside force has a greater influence on a child than the parent.” (source)

Every child’s initial role model is their parents. They are the people we idolise and want to emulate. They serve as role models for their children not just through direct encounters with them, but also through the examples they establish with their attitude and behavior. Parents can instill values in their children by modeling moral and ethical behavior, which can counteract negative impacts from classmates or the media. The pressure of being a role model can also motivate parents to improve themselves.

I cannot teach anybody anything; I can only make them think.” (source)

Teachers are important role models who can impact their students’ attitudes, values, and behaviours. A positive role model sets an example for children, encouraging them to pursue meaningful lives. Teachers are always present in the lives of children. They have as much, if not more, influence on children than parents do. Teachers have a significant impact on adults as well as children. Often, we are where we are today as a result of a lesson set by one of our teachers.

Not only our parents and or teachers can be our inspiration but our mentor and our coaches are also role models. They are regarded as good role models and mentors for their clients, working behind the scenes to help teams win, encourage them when they lose, and share in the joy of participation. They are the ones who always strive the best for us. Be it from our behavior, our values are life, they always inspire us.

An inspirational coach can assist you in overcoming obstacles in your life by providing encouragement to keep you going. For a coach, good coaching entails the development of life skills, confidence, resilience, and social participation in addition to physical skill training.

5 Most Popular Role Models To Exist

The Dalai Lama is the Tibetan people’s spiritual leader and their most ardent supporter of a free Tibet. The child, then known as Lhamo Dhondup, was born to a farming family in northeastern Tibet and was recognised as the reincarnation of the previous Dalai Lama at the age of two.

His Holiness, the 14th Dalai Lama, is the Tibetan people’s spiritual leader and their most ardent supporter of a free Tibet. He travels the world preaching peace, nonviolence, and love for his fellow man.

Steve Wozniak started Apple Inc. in 1976 and built it into a global telecommunications powerhouse. Steve Jobs was arguably one of the most driven and motivated entrepreneurs of all time. Most people assume his continual demand for perfection motivated him to complete tasks, but his main drive was his desire to leave something behind that would change everything.

Jobs was a master at leading by example as well as empowering and inspiring his employees to perform tasks independently. He became a role model for his employees by exhibiting traits he hoped to see them exhibit, such as his rigorous attention to detail.

Mark Elliot Zuckerberg is a co-founder of Facebook, a social networking site. He is many things to many people, and he is the first millennial CEO of the twenty-first century. He is a philanthropist and a technology innovator, and he was selected Person of the Year by Time magazine in 2010. Most millennials look up to this business hero for motivation to succeed as entrepreneurs.

He was the one who came up with a concept that allowed people all over the world to interact with one another. Facebook has not only revolutionised the social networking landscape, but it has also revolutionised the way millions of people communicate and stay in touch with their loved ones.

Oprah Winfrey is one of the most respected persons in the world today. She has used every opportunity she has had throughout the years to inspire and motivate others by setting an example with her powerful remarks. Oprah won over everything that can bring a person down, including poverty, violence, assault, and a slew of other ills. Oprah Winfrey is a great inspiration and one of the founders of the women’s empowerment movement. Her acts and words consistently impress and inspire others in the manner in which she desires.

Maya Angelou was born Marguerite Johnson in St. Louis, Missouri, and is an American poet, storyteller, activist, and autobiographer. Angelou had a diverse career as a singer, dancer, actress, composer, and the first black female director in Hollywood, but she is most known for her work as a writer, editor, essayist, dramatist, and poet.

I Know Why the Caged Bird Sings, an autobiography of her childhood, is her most recognised work. The book shows the importance of resiliency in the face of discrimination. She was an outspoken opponent of racial and gender prejudice. Angelou sought to make the world a better place, and she inspired many people with her insightful and passionate remarks. Maya Angelou, despite her sad experiences, continued to share her narrative with the world.

Who Is Your Role Model?

Anyone who inspires you, who you look up to, and who you want to be like is a role model.

Explain the meaning of role model?

A role model is someone whose behaviors, examples, or achievements are or can be emulated by others, especially young people. Role models who are effective have appealing qualities that make them simple to appreciate. They inspire people to make changes and set new goals.

What is the importance of a role Model?

What are the qualities of a good role model?

Give some popular role model examples?

Anyone can be a role model. They could be a parent, teacher, sibling, leader, celebrity, cousin, or uncle/aunt that we admire and want to emulate. Some of us do this on purpose, while others do so without realising how much they affect us.

Previous
The Importance Of Family Time & How It Can Help Your Health and Happiness
Next
What is Cognitive Behavioral Therapy?