What is Transformational Leadership?

Home » Blog » What is Transformational Leadership?

Transformational leadership style is thus, a comprehensive and integrated leadership characteristic required of individuals traveling the path of transformation. It is a leadership style where leaders work beyond their self-interest to identity change so that they can encourage and motivate their employees to innovate and drive them towards the process of change. Transformational leaders are the ones who can take charge in a group, stand out and motivate the group to work towards the success of the company.

This form of leadership in particular was crafted to be integrated and holistic, serving as a strong framework to anchor your own leadership ideas and experiments. Without such a comprehensive framework, leaders risk adopting the latest leadership style of the day found in the local market.

Now in recent times, it is the leader’s ability to instill clarity of purpose and meaning in an organization. Creating places of purpose, that were once thought to be a New Age fad, is now a survival card for organizations as competent workers seek meaning in their work and market changes necessitate transformational change. So, as leaders, how do you create a positive environment in which purpose dominates action and individual spirit shines?- This is a question to reflect upon.

Historians, political scientists, and sociologists have known for a long time that leadership went beyond the concept of social exchange between the leader and the followers. Weber’s (1924/1947) investigation of charisma exemplified such research. However, the concept of the transformational leadership model was introduced for the first time by James V. Downton, which was further developed by James MacGregor Burns. According to theory leaders and followers motivate and inspire one another to higher levels of morality and motivation. Later, Bernard M. Bass created on Burns’ original ideas to create what is now known as Bass’ Transformational Leadership Theory.

Charismatic- A transformational leader is like a role model to his followers. He inspires trust and commitment to a cause. Charisma refers to the ability to inspire a vision, it is the ability of an individual to influence others where there is an anticipation of becoming a part of something greater than self.

Empowering and Motivating- Transformational leaders continuously motivate their followers. The goal of the leader is a shared goal of the team. Thus, motivation becomes a major part of the process of achieving the goal. The followers feel valued and empowered. They extend a sense of purpose and meaning to achieve the goals. They inspire from the basic foundation of truth.

Intellectual and Analytical- Transformational leaders are well educated, well informed and they give a new perspective to old problems. They promote creativity, challenge boundaries, and apply a range of ideas and approaches to find solutions. They nurture independent and critical thinking and are always eager to learn.

Community builder- Transformational Leaders always work as a team and give importance to each member. They motivate their followers and drive them toward a common goal. They believe in community building. They feel that purpose alone can never be enough for achieving a goal.

Optimized performance and productivity gain- The employees in a transformational leadership style are motivated to do what they are asked to do. The main reason that underlines this behavior is the strong commitment of the employees to their organization. This motivation acts as a perfect source and thus increases productivity and performance level.

Aligned Goal- Transformational leadership style encourages employees to work towards a common goal. They have a shared vision and are constantly motivated by the leader to achieve the desired goal. They all work together as one and share a common purpose. 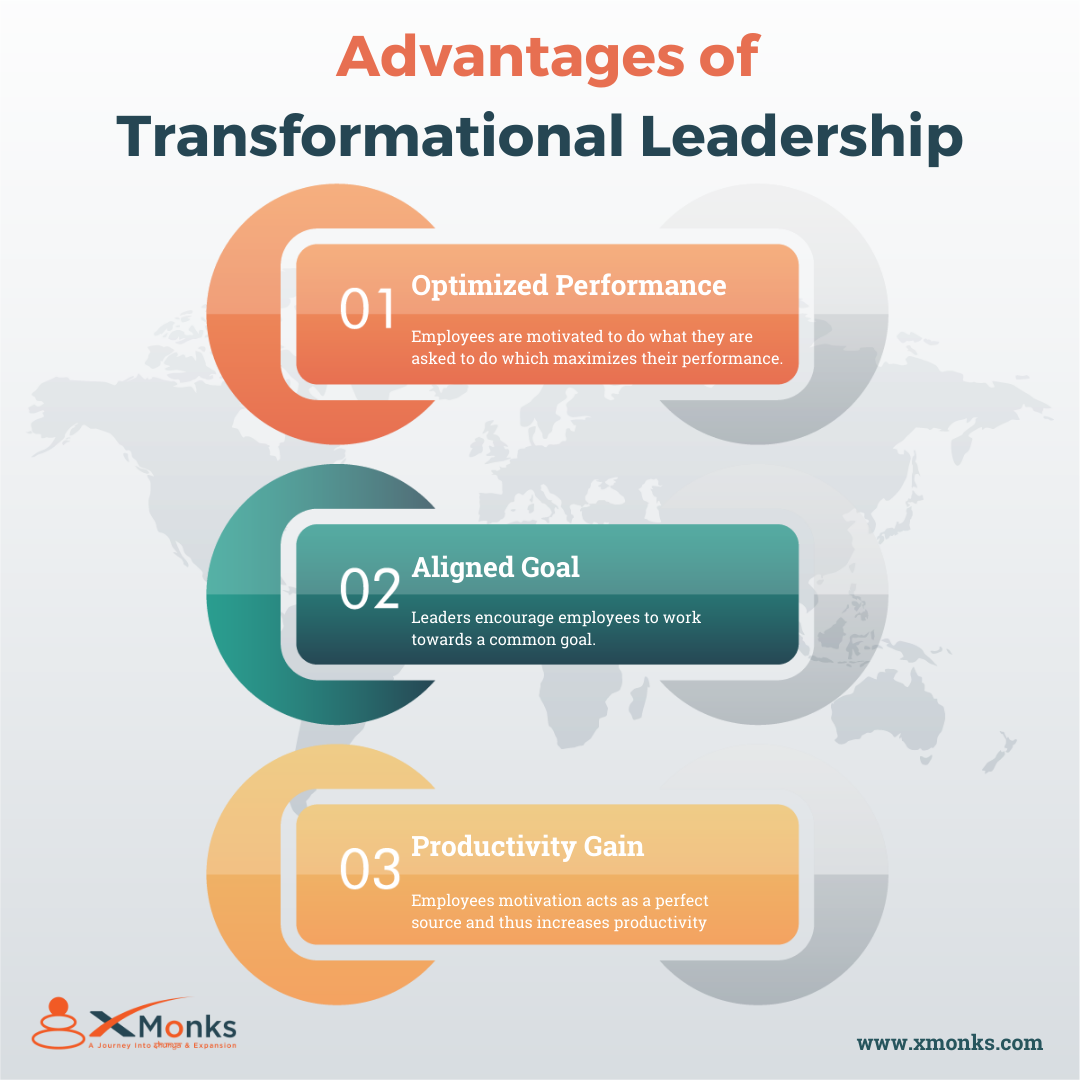 Now, let us explore some of the disadvantages of this leadership style.

Power Concentration- The power is increasingly concentrated in the hands of the leader, who has absolute authority. The leader has far more privileges than the rest of the group. Followers regard the leader in a semi-divine light and they are the sole source of key ideas.

Some of the most famous leaders like Jeff Bezos, Amazon, Nelson Mandela, Mahatma Gandhi, Abraham Lincoln, Margaret Thatcher, Reed Hastings of Netflix are all transformational leaders who have changed the phase of the world. John Quincy Adams has quoted “If your actions inspire others to dream more, learn more, do more and become more, you are a leader.”

Leadership Styles for a Leader

Leadership Styles for a Leader to Understand

Is Consciousness An Experience or An Attitude?

Tune in and Listen to Your Body