Understanding The Black Swans Of Leadership

Understanding The Black Swans Of Leadership

Who Are The Black Swans?

We underestimated how uncertain the future is. The global black swan phenomenon has the potential to change what we know about everyday life and business.

After the publication of Nassim Nicholas Taleb’s book The Black Swan: The Effect of the Extremely Unlikely, the word “Black Swan” has become synonymous with unpredictable events (2007). The concept was first proposed by philosopher David Hume to describe the unpredictable, an unlikely but not impossible disaster that no one ever seems to prepare for, the things one doesn’t know or doesn’t know that one doesn’t know. To build a context for his enunciation, Taleb combines the concept from knowledge theory that only impossible occurrences can be highly informative with Karl Popper’s principle of falsifiability to improve on Hume’s old problem of inference.

One vexing aspect of the Black Swan problem is that rare occurrence probabilities are impossible to calculate.

Adaptability to strange, weird, or unexpected occurrences is the essence of successful leadership, regardless of industry or organisational level. This is where the black swans of leadership shine.

But how does “Black Swan” fit in Leadership?

Emotional leaders are in high demand right now. Emotional leaders are humble. They have empathy. They are characterised by their communication abilities. They are in touch with their human side, and a greater ability to be present and engaged with others. They pay more attention to what they hear than what they say. They are appreciative and relaxing. They really care, as shown by their behaviour. They have no qualms about sharing their emotions.

These are the black swans of leadership, with a small possibility but a high impact.

They are the black swans, but not in the original theory of the logic of unpredictability, but in a logic of some kind of improbability. In a way, there aren’t many. Or they’re “hidden”. So we never know where we’ll find them or whether we’ll find them.

They are black swans because of their behaviour, beliefs, and true self. They have a profound effect on everything around them. Not just inside themselves, but also in those they lead and the organisations they lead. When we get to know black swans and have the ability to work with them, it’s easy to see why this style of leadership is so successful. It’s also simple to identify the characteristics that distinguish them that makes one wonder why there aren’t more of them.

The ability to keep opposing ideas in mind at the same time, such as being prepared and versatile, is needed to become a black swan leader. There are many other qualities you need to posses if you want to become the black swan leader- 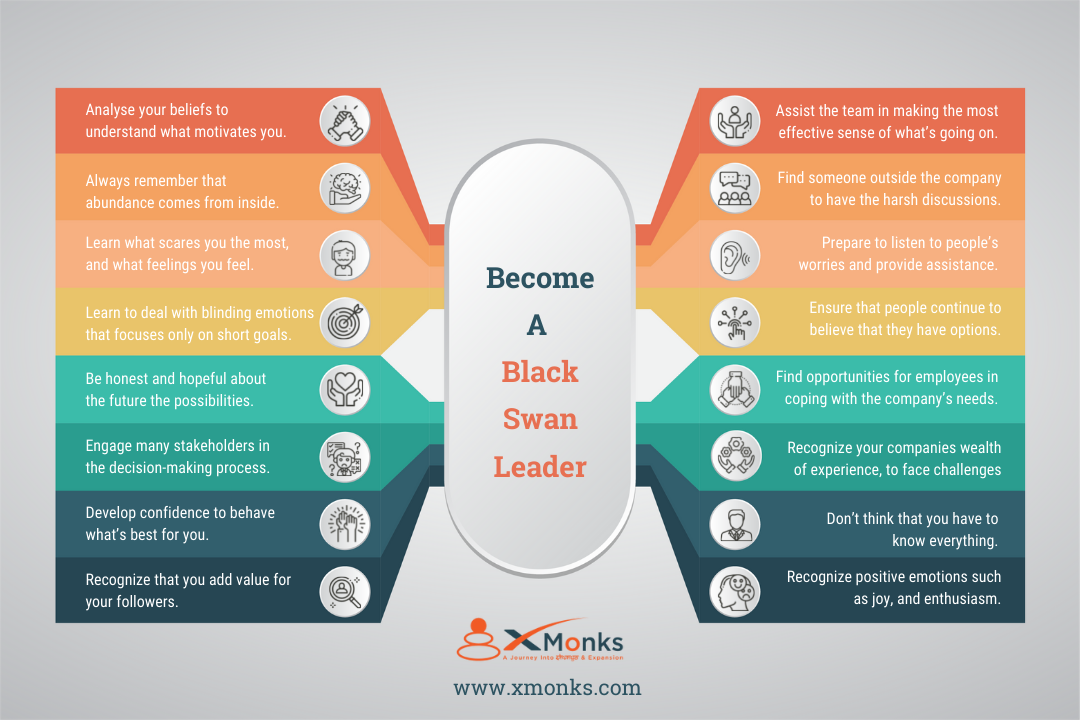 Why Are Black Swan Leaders Hard To Find?

Leadership styles have changed over time. Depending on the situation and the people involved, leadership styles must also be diverse, fluid, and manoeuvrable. Covid-19 was a Black Swan event that transformed the leadership landscape. The effect of Covid on leadership will be discussed at a later date.

Uncertainty brings new challenges and necessitates a new approach to leadership. There are many difficulties to leading in the conditions of adversity:

While some of these issues are related to business acumen, the majority of them revolve around learning how to lead and handle people. How to draw an optimistic vision of the organization’s and their own future?

Many leaders are paralysed by their inability to provide straightforward, far-reaching answers about the future, and therefore attempt to avoid such debates. Alternatively, they deliver false hope and assurances, which those they aim to convince quickly recognise as such.

As a result of the various circumstances, various leaders arise.

Each event shows a different aspect of a leader. As a result, black swan leaders are unique.