The Miracle of NLP Techniques

The Miracle of NLP Techniques

Neuro Linguistic Programming (NLP) explores the inner workings of the human mind. How we think, how we develop our desires, goals and fears and how we motivate ourselves, make connections, and give meaning to our experiences.

NLP is like the ‘user’s manual’ for the mind. It allows us to use the language of the mind to consistently achieve our specific and desired outcomes. NLP has its roots in the field of behavioural science, developed by Pavlov, Skinner and Thorndike. It uses physiology and the unconscious mind to change thought processes and therefore behaviour.

When you learn NLP, you learn specific skills and patterns necessary to make positive changes. This includes creating new choices, being more effective with others, breaking free of old habits, self-destructive patterns and behaviors, and thinking more clearly about what it is you want and how to get it.

NLP is intended to-

At the same time, NLP is designed to help clients see ways they have been successful in the past. It also determines how they can most easily and efficiently repeat that success in other areas of their lives. NLP therapists believe that their clients have the answers to their problems within themselves; it is simply a matter of helping them draw out those answers.

How NLP Helps an Individual

NLP might appear like magic or hypnosis. During therapy the subject goes deep into their unconscious mind and sifts through layers and layers of beliefs and perceptions. This makes the subject aware of any experience in, may be from early childhood, that is responsible for a behaviour pattern. NLP works on the principle that everyone has all the resources they need to make positive changes in their own life. NLP techniques are used as a tool to facilitate these changes.

NLP Therapy can be content-free. That means the therapist can be effective without knowing about the problem in great detail. Hence the therapist need not be told about the event or even the issue, thereby ensuring privacy for the client. Besides this we also have a non- disclosure agreement in which the interaction between the client and the therapist is kept confidential.

NLP believes in perfection of nature in human creation. Hence NLP encourages the client to recognize their sensory sensitivities and use them to respond to a particular problem. In fact, NLP also believes that the mind is capable of finding even cures to ailments and diseases. 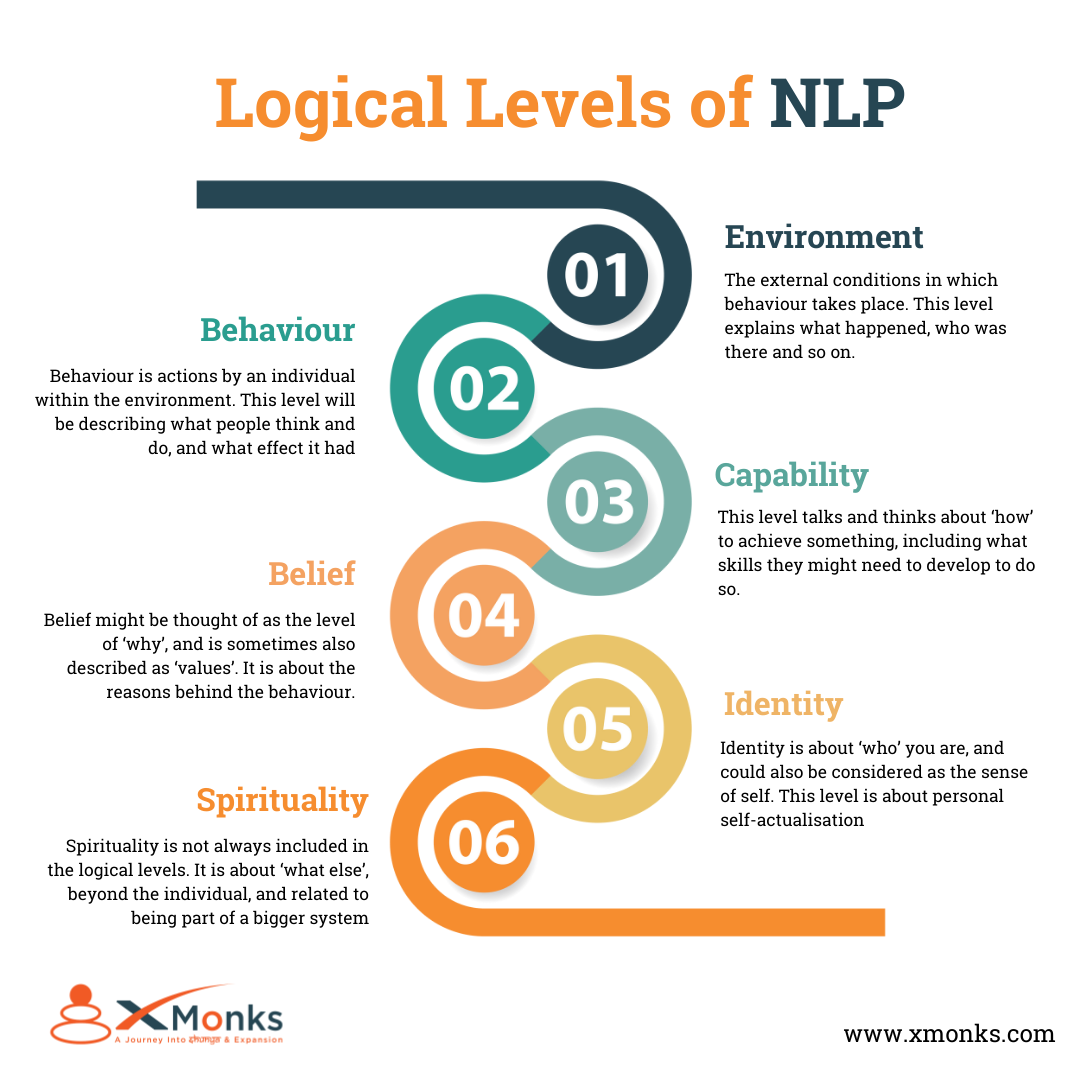 The Six Logical Levels of NLP

The Logical Levels is without a doubt one of the most valuable NLP models or tools: so much so, that we introduce it on the first day of our NLP courses;  so that it is being used and practised right from the beginning of a person’s training.

It was originally developed by Robert Dilts and Todd Epstein and is widely known by the names Neuro-Logical Levels or Logical Levels. These are-

Environment is about the external conditions in which behaviour takes place, and in which we operate. A person operating at this level will probably be explaining what happened, who was there and so on. In general, the ‘story’ will not be about the person telling it, and the energy will be in explaining how something happened. This may involve complaining.

Capability or competence might be considered the ‘how’ level. Competences drive behaviour through a personal strategy, involving skills and their development. A person operating at this level, is talking and thinking about ‘how’ to achieve something, including what skills they might need to develop to do so.

Belief might be thought of as the level of ‘why’, and is sometimes also described as ‘values’. It is about the reasons behind the behaviour, including any underlying values. Beliefs and values can either reinforce or undermine capabilities. For example, a belief that you are ‘no good at drawing’ could undermine any attempt to learn to draw well.

Identity is about ‘who’ you are, and could also be considered as the sense of self. Conversations on this level are often about personal self-actualisation, such as ‘What do I like?’, ‘What makes me tick?’, ‘What is my passion?’ A person suffering from stress and burnout often engages at this level.

Spirituality is not always included in the logical levels, and might be thought of as a step beyond the others. It is about ‘what else’, beyond the individual, and related to being part of a bigger system, whether that be family, community or beyond. Some people describe this as the ‘wisdom’ level, and others exclude it altogether, or link it to identity, as being part of how you see yourself.

Using the Logical Levels To NLP

A coach can help someone to change the level on which they are operating by changing the language to another level. This will change the problem, and bring a new perspective. This is one of the tools that coaches often use to help their clients to think through problems, but it’s equally applicable for individuals at home or at work, especially in leadership positions.

NLP techniques are a psychological technique that entails evaluating effective people’s methods and adapting them to achieve a personal objective.

Why is NLP Coaching important?

The NLP Coaching program is a highly successful behaviour training program for personal and professional improvement. There are a lot of advantages of NLP training such as Improving what you already do. Enhanced leadership, coaching, sales, successful training, enhanced charisma, and the art of persuasion communication.

What are the Six NLP Logical Levels?

The Six NLP Logical Levels are:

How does Neuro Linguistic Programming help an individual?

NLP (Neuro Linguistic Programming) is a branch of psychology that investigates the inner workings of the human mind. How we think, how we form our interests, ambitions, and fears, and how we motivate ourselves, make connections, and give meaning to our experiences are all factors that affect how we think.

Is 6 logical levels a part of an NLP Course?

The Logical Levels is without a question one of the most useful NLP models or tools: so useful, in fact, we teach it during the first day of our NLP courses, so that it is used and implemented right away.

What is NLP Training?

NLP training aims to identify and change an individual’s latent prejudices or shortcomings in their map of the world.

5 Steps Towards Becoming a Coach