The Emergence of Human Consciousness: Where is it from?

Home » Blog » The Emergence of Human Consciousness: Where is it from?

The word consciousness comes from the Latin term “conscĭentĭa” that means “knowledge shared with others.”

While you are reading this, your brain’s physiology is processing information about your surroundings. This is accompanied by a sense of self, the sensation of being alive. You are conscious—and that is about all anyone can say with certainty about the most perplexing phenomenon of the mind.

Yet one of our most important biological traits, consciousness, is rarely studied in the context of evolution. Theories of consciousness come from religion, from philosophy, from cognitive science, but not so much from evolutionary biology. Maybe that’s why so few theories have been able to tackle basic questions such as: What is the adaptive value of consciousness? When did it evolve and what animals have it?

Almost everything we know about consciousness, as well as every philosophical and scientific conundrum it poses, is obscure. The surrounding questions are fraught with contention, debate, and discord: How are we conscious? What are its antecedents? What is consciousness precisely?

Regrettably, no commonly acknowledged answer exists to this question. Although the simplest definitions indicate that awareness is essentially anything and everything that you experience, this is far from a satisfactory response.

The ambiguity around the meaning of consciousness is symptomatic of how little we comprehend it. The Stanford Encyclopedia of Philosophy defines it, among countless other alternative definitions, as “states one is aware of,” however this allows lots of space for disagreement regarding humans’ and other species’ various levels of awareness.

The term consciousness also refers to several other aspects involving both its levels such as in sleep, coma, dreams and waking state, namely called Conscious, Subconscious and Unconscious, along with contents that can be subjective, phenomenal and objective. A second issue is the problem of other minds, namely, the possibility to establish whether others have minds very like our own. Moreover, human consciousness has been linked to three different forms of memory: procedural or implicit, semantic and episodic. [We will delve into the philosophical aspect in another blog. Please let us know if you want us to write about it.] 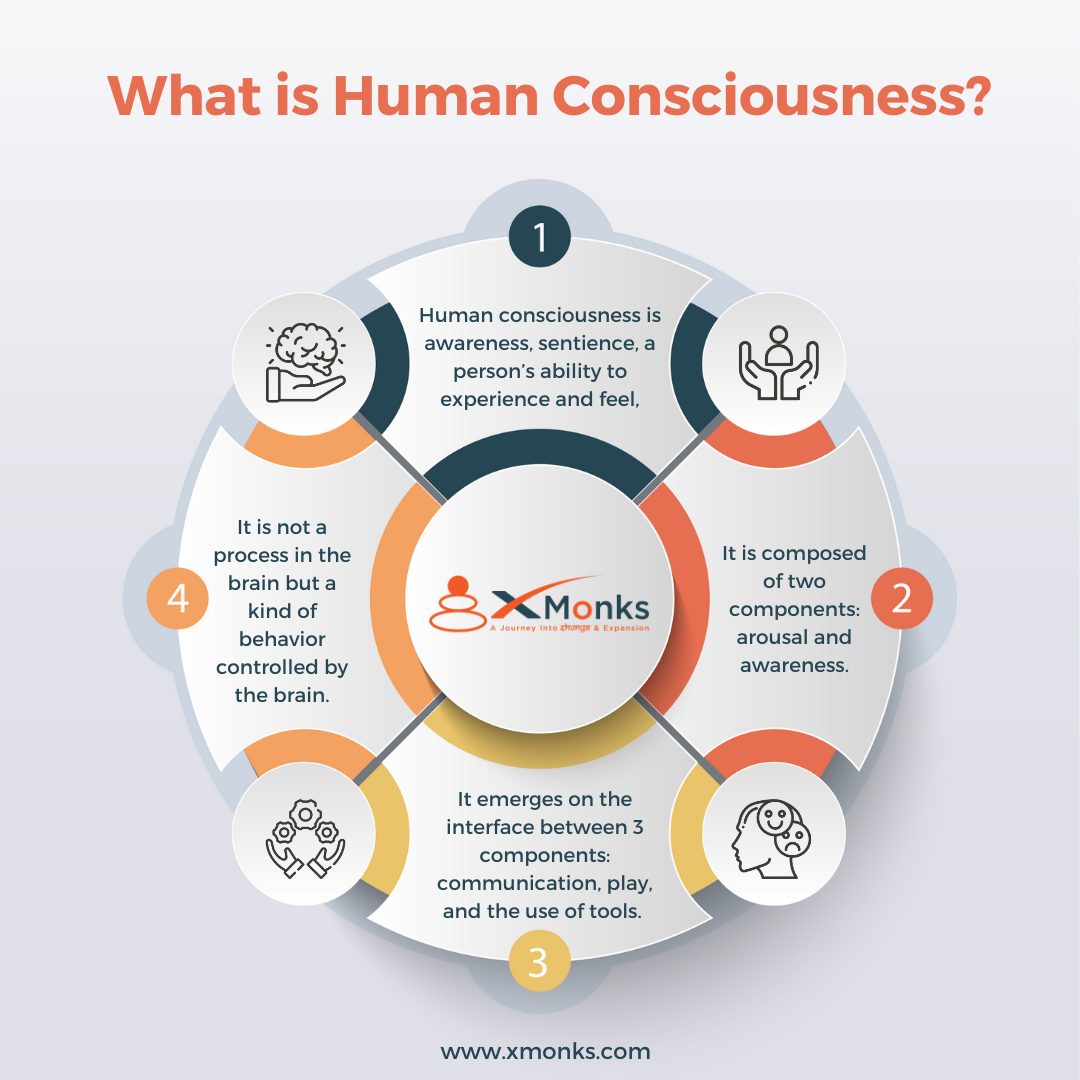 What is Human Consciousness?

Human consciousness has been defined as awareness, sentience, a person’s ability to experience and feel, but despite the important role it plays in our lives and making us who we are, we actually know very little about how consciousness works.

Scientists currently believe that consciousness is composed of two components: arousal and awareness. The first is regulated by the brainstem, but the physical origins of the latter were always a mystery. Now, a team of researchers at Harvard think they may have discovered the regions of the brain that work with the brainstem to maintain consciousness.

Consciousness is not a process in the brain but a kind of behavior that, of course, is controlled by the brain like any other behavior. Human consciousness emerges on the interface between three components of animal behavior: communication, play, and the use of tools.

Where is Consciousness from?

Annaka Harris applies Thomas Nagel’s famous essay What Is It Like to Be a Bat? in her book Consciousness: A Brief Guide to the Fundamental Mystery of the Mind. “An organism has conscious mental states if and only if there is something like being that organism.”

Ask yourself what it is like to be a stone? You will have no thoughts. But if the same is asked for a fish or a plant or even as small as a bee, you will have thoughts and perception.

This is a reasonable and uncontroversial place to begin. There is a quality to being you, a quality to experiencing the emotions and feelings inherent in life. If an interior experience is occurring, consciousness is almost certainly there. However, by defining consciousness in this manner, we instantly encounter a considerably more difficult difficulty than just qualifying the idea.

“Because consciousness is experience itself,” Harris continues, “it’s easy to overlook the enormous concerns that confront us each moment: Why would any collection of stuff in the cosmos be conscious? Is there anything comparable to being a grain of sand, a bacterium, an oak tree, a worm, an ant, a mouse, or a dog?

Even if we accept awareness as a given in our own species, the origins of consciousness remain a mystery.

The philosopher Rupert D.V. Glasgow argues in his book Minimal Selfhood and the Origins of Consciousness that consciousness is a Darwinian adaptation that confers an advantage on those organisms endowed with it: in concrete terms, the advantage of being able to propel oneself in a direction aligned with one’s interests rather than simply remaining motionless.

According to Michael Graziano, a Princeton University professor of psychology and neuroscience, consciousness evolved as a solution to a difficulty that most brain systems have met throughout evolution: the requirement to handle a near-constant stream of information. To address this, neurological systems evolved processes such as selective signal amplification, in which the brain directs attention to the neurons firing most furiously in order to filter out and prioritise particular information.

This mechanism has been observed in a wide diversity of species over hundreds of millions of years. According to Graziano’s article in The Atlantic, “Selective enhancement most likely originated between hydras and arthropods—between between 700 and 600 million years ago, close to the dawn of complex, multicellular life.”

According to AST, human consciousness can be traced throughout this evolutionary history, with each successive attention mechanism becoming more complicated. Interestingly, Graziano concludes that, due to the early development of this fundamental attention mechanism, it provides a scientific foundation for consciousness in a large proportion of the animal species.

Other, more radical views include Panpsychism, the belief that all particles, even those as minuscule as electrons, possess a form of consciousness. According to the hypothesis, these tiny fragments of lower-level awareness combine to generate the greater consciousness that humans possess in complex systems such as the brain.

However, the hypothesis is dogged by what is known as the combination problem, which is the conundrum of how the consciousness of many may coalesce into a cohesive awareness of one, and there is no scientific evidence to support it.

Finally, some feel that consciousness is a big illusion, that it is simply the mind convincing itself that it is conscious, rather than a fundamental property of the brain.

Daniel Dennet, the polarising philosopher, holds precisely this position, claiming in an interview with Tufts University that “consciousness is not a part of the brain.” That is what brains are capable of. It is not in your DNA in the same way that German or English are not. Many of the characteristics of awareness are things that are essentially imprinted culturally and at the knee of mother. It is an integral aspect of your parenting, your upbringing, and your language development. It is where you learn language and also a great deal about consciousness.”

We’re likely to discover a great deal more about the nature of consciousness before any one origin explanation is proven correct, or before either the hard or soft problem is resolved. Regardless, the contemplations that result from even a rudimentary examination of awareness are sufficient to maintain the inquiring mind until we arrive.

We might not know how we gained consciousness, but we sure can move towards a greater human consciousness and make an ecosystem. This Coaching Conclave 2021, let’s raise consciousness through coaching.

Awaken: A Journey to Purpose, Wholeness and Healing

Decoding The Essence of Life

Decoding The Essence of Life Through Our Existence

The True Essence of Awareness

The Law of Pure Potentiality

Living By The Law of Pure Potentiality

Exploring the Undefinable- Being, Love, and Consciousness

Previous
We Speak Ourselves Into The World: How Language Creates Expression
Next
Practicing Presence