From the early dawn of civilization, humans have always focused on growth. Their first requisite in Maslow’s hierarchy was to achieve growth and development for a better, easy life. They moved further and the need and craving for development increased. Coaching is one such element that brings out the best of human development.

But what is the first thing that pops in your mind, when you hear the word coach?

Is it- What is Coaching?

Or is it- Is Coaching for me?

Or- What is the process of Coaching?

Whatever the question might be, the answer is rather not that simple. Let us explore them one by one.

The word ‘coach’ comes from a place in northern Hungary called ‘Kocs,’ where carriages that were drawn by horses were manufactured. Coach’s definition as an instructor or trainer dates back to 1830 when it was Oxford University’s exclamation for a tutor who ‘carried’ a student through an exam; the phrase was then used to improve athletes’ performance in the 1800s. Thus coaching dates back to the time when sewing machines came into the picture. Well, now that we know how coaching enters this world, let us now explore what is coaching?

Coaching in simple words can be defined as a human development process. It incorporates structured, focused contact and the application of suitable tactics, tools, strategies, and approaches to promote desired and long-term change for the coachee and sometimes other stakeholders.

The popularity of coaches is undeniable, and an increasing number of organizations across all economic sectors are commissioning coaches to assist their employees at various phases of their careers. All types of coaching, in their own unique way, seek to develop a solution to cater to the needs of the clients. Thus the whole process of coaching is to provide to the client.

Is Coaching for me?

Another important question that comes into their mind is- Is coaching for me? Well, it’s true, for those who are aspiring to become a coach, always have a doubt if coaching is the right path for them. So, whatever career path you are on, be it you are a businessman, a leader, a CEO, a manager, a doctor, or any other profession, coaching is always an option for you. It’s simple, it is like an add-on advantage for you.

Now, that we know that anyone can be a part of coaching. Let us explore, different stages of Coaching.

Coaching is a dynamic process. It requires constant attention and upgrades suiting the needs of a client. Numerous clients who are coaches have their fair share of struggles. There is a lot of uncertainty, chaos, and a lack of awareness when it comes to seeing the right way. Let’s explore all the stages of coaching to change this belief.

So after the coach and the client establish a relationship and they know each other, they move to the second step in the stages of coaching that is analysis. In this stage, the coach plays an active role in understanding the client. The coach along with the coachee sits together during a coaching session to analyze the following:

The third step in the stages of coaching is goal setting. In this step, the coaches after the identification of the problem create an action plan to achieve the goal. By setting of goal, we mean breaking down the problem into smaller parts to identify the solutional areas to work upon. A goal must be broken down into distinct and quantifiable elements in order to be actionable. Set time limits for completing these components and check in on them on a frequent basis to see how they’re progressing.

The coach collaborates with the coachee to ensure that the development plan is well-written and prioritizes three or four “mission crucial” developing areas. The issues are described, the objectives are determined, the strategies and timetables are set, any obstacles/hurdles to achieving the primary objectives are recognized, and ways to overcome the barriers are explored. These need to be well defined and established so that in the further stages of evaluation, the measurement can be correct.

The process of coaching is dynamic, it does not stop when the goals are set and an action plan is created. It keeps on changing according to the needs of the client. Thus the fourth step in the stages of coaching is goal redefining to create a targeted and customized plan of action. The coach collaborates with the coachee to ensure that goals are met, learning is ongoing, and new concerns are appropriately addressed.

The fifth step in the stages of coaching is feedback or reflection. In the final stage, the process of coaching involves setting up measuring tools. It is easy to understand that one can set up an action plan and goals that need to be achieved. But with this, the process of measurement of the percentage of achievement remains unidentified. This means that even if we set up a goal we might never be able to measure if we have succeeded in achieving the goals. So in order to rectify this problem, it is important to set up some measuring tools in order to check the progress. 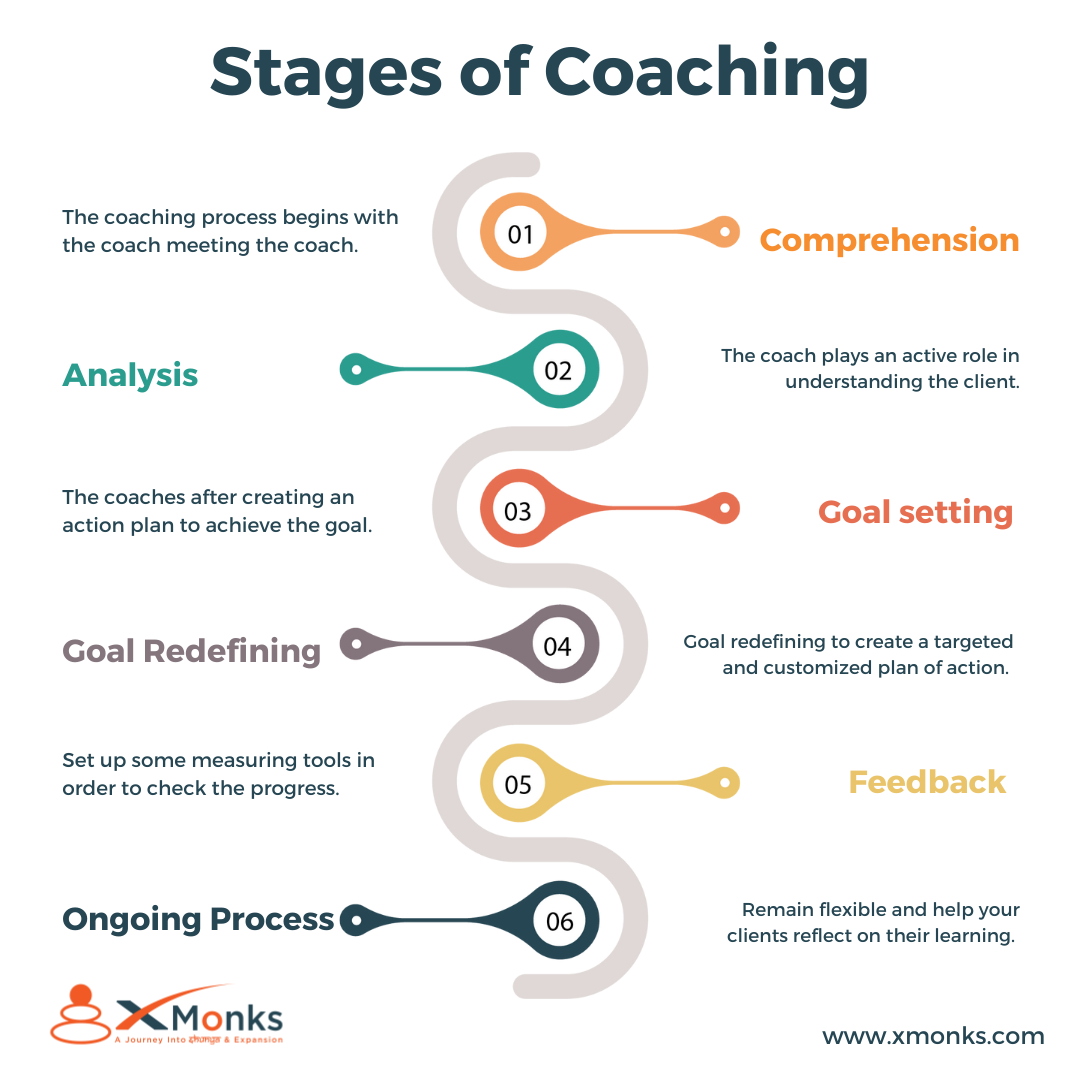 The ongoing coaching process is the final phase in the coaching stages, and it ensures accountability and provides support to the coaching participants as they work toward their goals. To that goal, a great coach demonstrates two skills:

1) recognising progress and victories, and

2) motivating the participant to overcome barriers and obtain the necessary direction to succeed.

These two abilities are necessary for putting action plans into action and supporting them. It is important to understand that this stage is the most important part of the stages of coaching. Because in the absence of this stage, the development of the coachee will be hindered. Remember to remain flexible and help your clients process and reflect on their learning. Always try to bring out the best in them, and help them to get the best out of their coaching process.

What are the different Stages of coaching?

The different stages of Coaching are as follows:

What is the history of coaching?

The name ‘coach’ comes from a town called ‘Kocs’ in northern Hungary, where horse-drawn carriages were made. Coach’s origins as an Oxford University exclamation for a teacher who ‘carried’ a pupil through an exam date back to 1830; the phrase was then employed to increase athletes’ performance.

Coaching can be regarded as a human development process in basic terms. It includes structured, concentrated contact as well as the use of appropriate methods, tools, strategies, and approaches to help the coachee achieve desired and long-term change.

Why is comprehension an important part of the coaching process?

What are the different Coaching assessment tools?

To get a full picture of how an individual’s style, personality, and behaviour are related to on-the-job effectiveness, coaches use tools like the Process Evaluation Scale, The Satisfaction with Life Scale (SWLS: Diener, Emmons, Larsen, & Griffin, 1985), The Leadership Skills Inventory (LSI: Karnes & Chauvin, 1985), and other coaching assessment tools.

What Coaching Is & What It Is NOT!

Previous
Coaching Model – Guide (2021)
Next
Dynamics of a Coaching Conversation