Can you handle complexity?

Home » Blog » Can you handle complexity?

Life itself is fundamentally complex in nature, as are all of its manifestations. From the biological aspects discussed by the life sciences to the cognitive and behavioural aspects originated by human relations.

Leaders aim to keep things easy, predictable, and coordinated. In order to stay out of their way, you recruit good people, treat them well, set them clear goals and do your best. All can go off without a hitch if you do your homework, organise things well and your people perform efficiently. Or so goes the theory.

Yet reality always wreaks havoc on even the best plans set out. Technology advances, consumer preferences change and new products are launched by rivals. Your basic model becomes maddeningly complicated before you understand it, and your company struggles to coordinate a response to a rapidly shifting marketplace.

In a modern world, organisations should take into account the uncertainty and complexity. This is because the rate at which things happen is too fast and conventional organisations are not able to keep up. The solution lies not in improved scheduling or implementation, but in greater empowerment. We need to transfer our thinking from norms to networks and learn how distributed links around the enterprise can be facilitated. 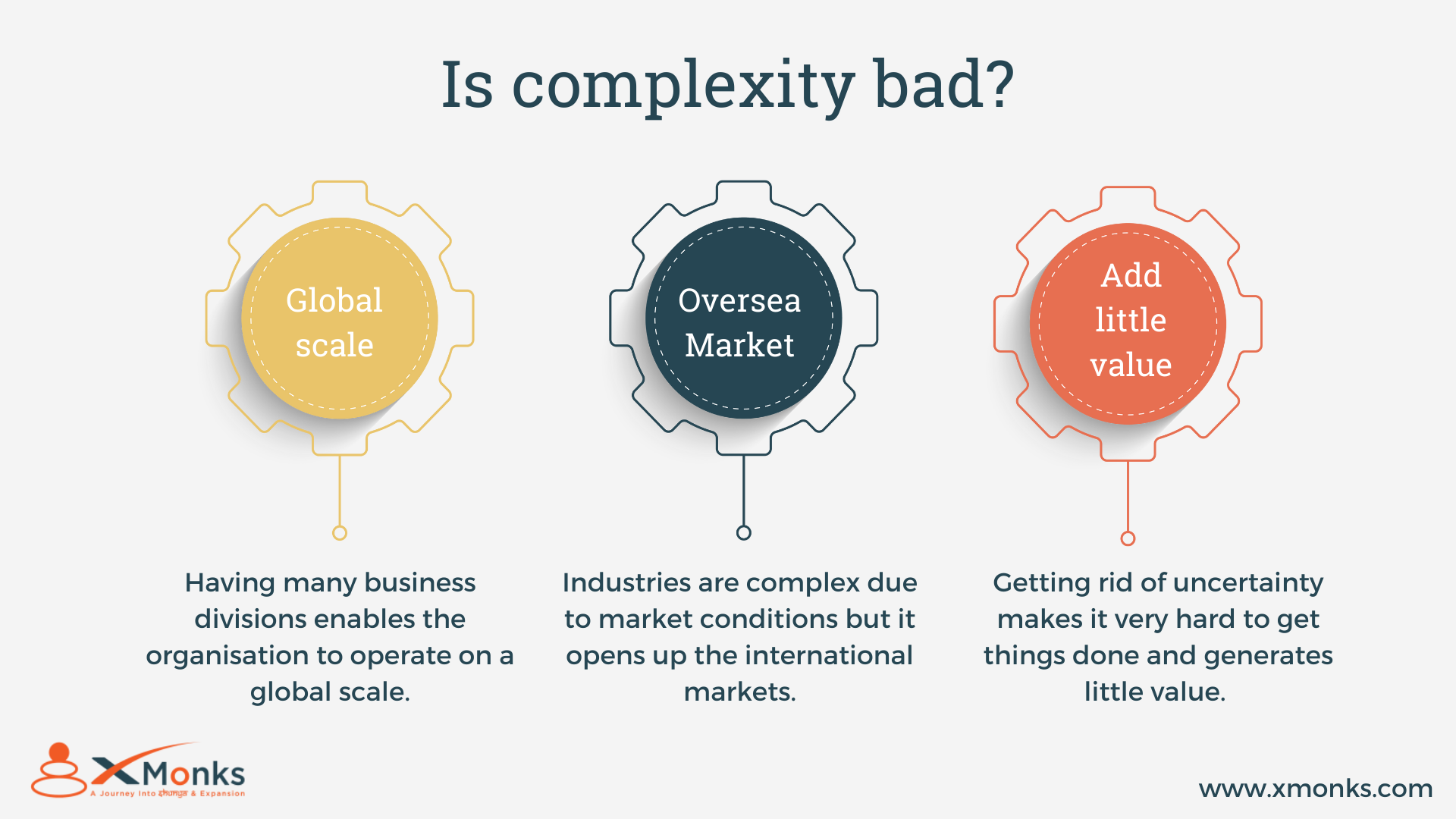 Complexity is not necessarily negative. Having many business divisions enables the organisation to operate on a global scale. Complexity may be a part of a good businessman’s strategy. Similarly, to expand the market there could be highly significant benefits that far outweigh the costs.

Although industries may be complex due to a combination of numerous regulatory procedures like market conditions, and union structures, complexity may be framed in the sense of a particular organisation. There is no doubt that there is also value to be found in simplicity: observe the organisation that has a limited international footprint that breaks even.

The solution is not to make the company the easiest we can possibly make it, instead, it is to get rid of the uncertainty that makes it very hard to get things done and generate little value. Twisting the logic, if complexity can be used as an asset, then we can come up with methods to handle items that are complicated, such as the “Big data” that has become the latest buzz word in the business world.

How does a Situation become Complex?

Complex systems have been around for centuries and business life to include certain activities that are unexpected and even unpredictable. In the past, complexity was more prevalent within large structures such as cities, but is now expanding to influence almost everything we do and everything we build. A significant portion of the growth in disability is attributable to the digital transition of the past few years. Systems that used to be distinct are now interconnected and interdependent and are thus by definition more complex.

Nobel Prize winning economist Thomas Schelling demonstrated in “Micromotives and Macrobehavior” how even good intentions can go disastrously wrong. Less-known applications of Ghettos are segregation models in which even those who choose to live in mixed communities may give rise to extreme segregation.

Organizations that are high in complexity appear to deliver less value. This is an important topic that cannot be overlooked by top executives. Embracing uncertainty and expecting that workers will learn how to handle it will waste energy and money. When people find it difficult to make decisions or do things, their morale suffers and they become depressed.

To avoid unintended consequences, the top team must discuss the problems directly. If there is a pervasive degree of complexity, it might imply clarifying roles across the entire organisation. The level of and difficulty of the role a person takes on doesn’t always reflect the complexity of the mission. In certain people, there are some factors that make them better at dealing with uncertainty. But what capacities does a Manager need in order to successfully solve complexity?

The managing potential of uncertainty needs to be investigated to avoid unanticipated consequences. To keep it short, our justification is that reducing uncertainty increases the likelihood of success. As one company managed to cut the time it took to develop and approve new products down to almost half, it did so without overwhelming the product creation and operational staff.

As executives spoke about the scope for generating value from uncertainty, they recognised the issue of poor responsiveness to consumers, inadequate risk management, inefficient procedures, and frustration and stress among employees. They feel that challenges are growing, with such factors as an increase in M&A, increasing product proliferation, increasing regulation, and more focus on internal cooperation in the marketplace. What will we do to confront the expansion of society at large complexity?

Our advice is as simple as it is practical: concentrate on the challenges that make it hard for workers to get things done and help employees deal with the complexity of their jobs. For most employees, dealing with the consequences of increased regulation is less of a priority than having specific responsibilities, goals, and accountabilities in an organisation which promotes initiative and cooperation.

Can you handle complexity?

Yes. You only need to understand that life itself is fundamentally complex in nature, as are all its manifestations. From the biological dimensions of life sciences to the psychological – behavioral components of human relationships. If one wants to handle complexity, miscommunication must be avoided.

How to Deal With Complexity?

To deal with complexity, the top team needs to discuss the issues explicitly. If there is a widespread degree of complexity, it may involve clarifying roles across the entire organization.

Do not believe that complexity is bad. Having many business divisions allows the company to work on a global level. Complexity may be a component of the strategy of a good businessman

The amount of variation that occurs in an organisation under various elements of the company is known as organization complexity.

How to manage complexity in an organisation?

Organisations should take complexity and ambiguity into account in the digital age. This is because the pace at which things happen is too quick and it is not possible to keep up with formal structures. The solution to manage complexity is not to improve strategy or execution, but to increase independence.

Previous
Be Grateful of Your Experiences
Next
Coaching as a Career