Conflicts are an inevitable part of our lives. Whether it is your colleague failing to work in compliance, your neighbour constantly taking your parking spot, or the legendary sibling conflict. Conflicts big or small can emerge in any part of your life and in fact, I feel to some level it is also healthy. Because humans function in such a manner that this wear and tear is bound to happen to mark a healthy relationship. But this is not true in all cases.

If you’re like the majority of folks, these disputes probably make you feel anxious, stressed, depressed, annoyed, or afraid. You might have made an effort to avoid the issue entirely or dug in your heels and refused to make any adjustments.

Whatever the case may be, these disputes definitely make you feel bad. Maybe you thought that things would get better or easier in the future, but the cycle keeps happening. What if I tell you there is a solution? What if you could approach these challenging situations in a more considerate, compassionate, and helpful manner?

I’m sure this might seem like a hocus pocus. But trust me it is possible because I speak with experience. So let’s begin.

We often consider ourselves unique people and consider our difficulties to be complicated and singular. In reality, we share a lot of similarities with our coworkers when it comes to how conflicts begin and why issues turn into unpleasant situations. Miscommunication, employee attitudes, insubordination and treatment of others often lead to such difficult situations, especially in a workplace. So, conflict resolution becomes of utmost importance.

Coming to the question, what exactly is conflict resolution? It is the process of peacefully resolving a conflict between two or more parties. It is a cooperative problem-solving process in which the conflict is a mutual problem to be resolved cooperatively by both the parties involved.

So, now the question is how does this happen. How does this resolution take place? Do the parties just sit together, discuss together and the problem gets solved, or is there a third party involved? Let’s see.

Tapping into Conflict Resolution with A Coach

There is no denying that conflicts are bound to happen but when problems progress to the point where taking action is obviously necessary, you don’t have to face them alone. You don’t have to panic or charge into the battle without first considering the tools at your disposal.

By considering what is already in place and figuring out how to enhance it with a little assistance from your peers, you can develop a tailored strategy to meet your particular circumstances.

So you need to find a mentor, a coach. He can either be an internal resource or an external resource. Internal sources are your colleagues, HR, and many times your management too. External sources on the other hand are your friends and family who support you constantly.

One of the most popular methods of conflict resolution is through a coach. Conflict coaching gives a person the chance to resolve a specific conflict in a constructive way by having them meet with a conflict coach or mediator. She benefits from coaching’s encouragement to strategize or consider alternative courses of action as well as its ability to help her better grasp the circumstance and her part in the conflict. The employee can learn and practice new responses and interactions with her coworkers with the aid of this strategy.

An individual who is in dispute with another person or persons can work one-on-one with a coach. The coach will make an effort to assist the person in using a set of skills or methods to manage or resolve the conflict. The conflict coach offers a focused one-on-one approach for bettering problem-solving methods, social skills, and, most importantly, reflection. Some of the areas around which a conflict coach works is as follows: 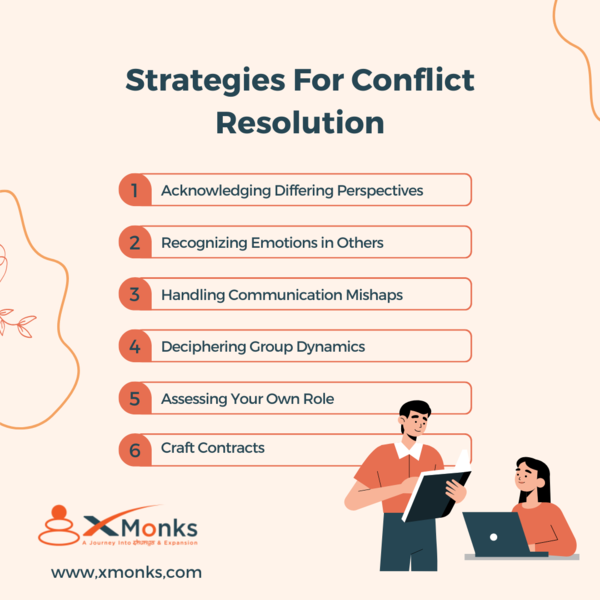 Every member of your team has a unique lens through which they view the world and one another, including you. On the way in and out, everything you encounter, hear, and say is passed via your filter. How you present and receive information is determined by these filters. So, it becomes important to consider all the perspectives in the process of conflict resolution. As a manager or as a coach, always consider the point of view of both parties so that they feel acknowledged.

Recognizing Emotions in Others

Most organisations embrace positive emotions. Employees express their positive feelings in a variety of ways, such as their joy about securing a major client, their celebration of a new product, or their pats on the back when a project is officially over.

Managers frequently make the mistake of failing to understand that all emotions, even happy and furious ones, can be used as indicators of a person’s personal values. Positive feelings indicate that values are being upheld, but negative feelings indicate that more effort has to be done. Tears or an employee raising his voice to the point where the entire company falls into awkward silence are clear signs that an issue has become emotional.

Communication makes the world go-’round, and the same is true for you and your employees. You can tell whether you understand each other by the words you use, your voice tone, and your body language. Communication breakdowns result from employing ambiguous or perplexing language.

When expressing your true intentions, avoid using words like “when you get a chance,” “many,” or “occasionally.” The phrases “always” and “never” might also land you in trouble. A less stressful workplace is created and effective communication is modeled when you choose your words carefully and in a way that stimulates discussion.

Two workers can communicate flawlessly and function like a well-oiled machine. When a third team member is added, group dynamics are now in effect. Wow, that totally alters everything!

From a managerial standpoint, a team that is productive and successful can be thrilling. However, communication breaks down if cliques emerge and coworkers begin searching for allies to join them in power struggles behind closed doors. As mediators make sure you maintain the group dynamics in such a way that neither the newcomer feels unwelcomed nor the old employees feel invaded.

Many times conflicts take a bad turn and even as a manager it becomes difficult to move to a resolving point. In such circumstances, the best you can do is to form agreements so that the two parties work in compliance. Bring the employees back together and let them discuss any learnings from the private meeting sessions if they so want. Start focusing on potential solutions and reach an agreement (with specifics! ) on who will do what and when.

Assessing your own role

You might not even be aware of what it is that you’re doing or not doing that’s producing conflict on your team. When there is a disagreement, most people prefer to focus more on what the other person is doing than on their own actions and emotions. So it’s best that you assess your role and reevaluate everything.

There are many various ways to approach conflict management. Even though these approaches differ, they all make use of the same management techniques. You must practice each of these abilities and learn when to use them in order to manage conflict effectively. The fundamental abilities and traits that you must develop if you wish to manage conflicts at work are listed below.

Conflict Resolution Examples In The Workplace

Potential conflict occurs when perceptions, objectives, or ideals diverge in an area where stakes are high. Conflict may be fostered by misunderstanding or disagreement with the shared goal and methods for achieving it. Additionally, pursuing group objectives may prevent members of the organisation from achieving their own objectives.

But conflicts mainly occur due to lack of communication, competition, inconsistency, diversity, values, or even structure sometimes.  This causes the importance of conflict resolution to be more important than usual.  Let’s explore some of the classic conflict resolution examples in the workplace scenario.

In the end, all I want to tell you is that like Atticus Finch said in Harper Lee‘s To Kill a Mockingbird, “If you can learn a simple trick … you’ll get along a lot better with all kinds of folks. You never really understand a person until you consider things from his point of view … until you climb into his skin and walk around in it.” So always see all sides, respect all sides and in the end forgive. Because common we all are merely human. We make mistakes and we grossly misrepresent situations. Empathy for one another can help us overcome disagreements and make each other better individuals.

What are the effective strategies for conflict resolution?

Recognizing Emotions in Others

Assessing your own role

Give some skills for conflict resolution.

The fundamental abilities and traits that you must develop if you wish to manage conflicts at work are listed below.

Give one conflict resolution example in the workplace.

Task-based conflict, which develops when participants in an interdependent project network must coordinate their activities so that everyone can successfully complete their part, is one of the most well-known examples of conflict resolution. When this occurs, job delegation must be handled properly to ensure that everyone is working toward the same deadlines and that it is obvious what each individual is responsible for carrying out.

What exactly is conflict resolution?

It is the process of reconciling two or more parties to a problem in a peaceful manner. The conflict is treated as a shared issue that both parties must settle constructively in this process of problem-solving.

How does conflict coaching help?

By meeting with a conflict coach or mediator, conflict coaching offers a person the possibility to resolve a particular dispute in a positive way. She gains from coaching’s capacity to better understand the situation and her role in the conflict as well as its ability to inspire her to strategize or consider alternate courses of action. With the help of this tactic, the employee can learn and practice new reactions and interactions with her coworkers.

Finding The True Essence of Coaching

Passion To Purpose with Ankit Jhamb

Roles of A Coach

8 Roles of A Coach

The Core of Coaching/Life with Gaurav Arora

Previous
The Procrastination-Perfectionism Loop: Why Most Perfectionists Handle Deadlines Poorly
Next
Decoding The Essence of Life Through Our Existence