The earlier you can put simple foundations into your Coaching, the more effective coaching is going to be. And, here are some of them that will help you simplify coaching.

Peter Sengei in his book ‘Presence’ quotes that “transformation in science happens in a container.” So, it gets intriguing to understand how one can create transformational conversations during coaching. Transformational such that the person being coached gets insights that creates a change.

What would happen if conversations are kept in a container?

Coaching is all about open questions. If we want to have transformational coaching, try and put boundaries around it. ICF calls setting such boundaries as establishing the coaching agreement.

This requires the coach to make the questions of the right size for the time that is available. This helps us get to the heart of the matter much more quickly than the long time that we see coaches spending.

Working in partnership while coaching

To keep coaching simple, create a partnership that can work. Without building a partnership into the conversation, you cannot make coaching simple. But, to make this happen can get tricky. Because when as a coach you start asking questions and they start answering, you are the one gathering all the information. You feel that you are gaining insights during the conversation while processing the data that you have gathered.

But, what you should be doing as a coach, instead is to have the other person start processing their own data and share the insights with you.

So, coaching can work in partnership when both people are pretty equal. Even coaching training recommends that coaches should not be taking power during a conversation. Create a level-playing field by managing the push and pull between yourself and the coachee.

In conclusion, as coaches we need to try to speak less so that the other person can think more.

Partnership is just in the beginning, but also during the conversation. It should also stay until you land the conversation to meet the goal and intention of the coachee.

This brings us back to establishing the coaching agreement. This requires us to ask three questions:

These questions help us create the container around the conversation.

Say as little as you need to say to ensure that you get them to think and end the conversation in a partnership.

How to handle conversations that are all over the place?

This can be done by tracking progress. But, progress should be tracked such that it helps the other person figure out which is the most important thing one must do today.

This requires us to create many ‘mini containers’. This means we may do something for 15-20 minutes and keep moving to the next container to ensure that we are doing everything to meet the end.

What is the design that makes a coaching conversation transformational?

The design of transformational coaching conversations are the ones in which the coach is observing the processing of data by the other person. This may mean that you don’t necessarily complete your questions. Most often coaches interrupt the thinking of the other person by completing the question.

For more transformational conversations to happen, “Never break the silence”. Let the coachee think. Wait for them to respond. Watch them all the time.

During the pre-conversation while you greet, set up the agreement of what you both want to achieve at the end of that conversation. 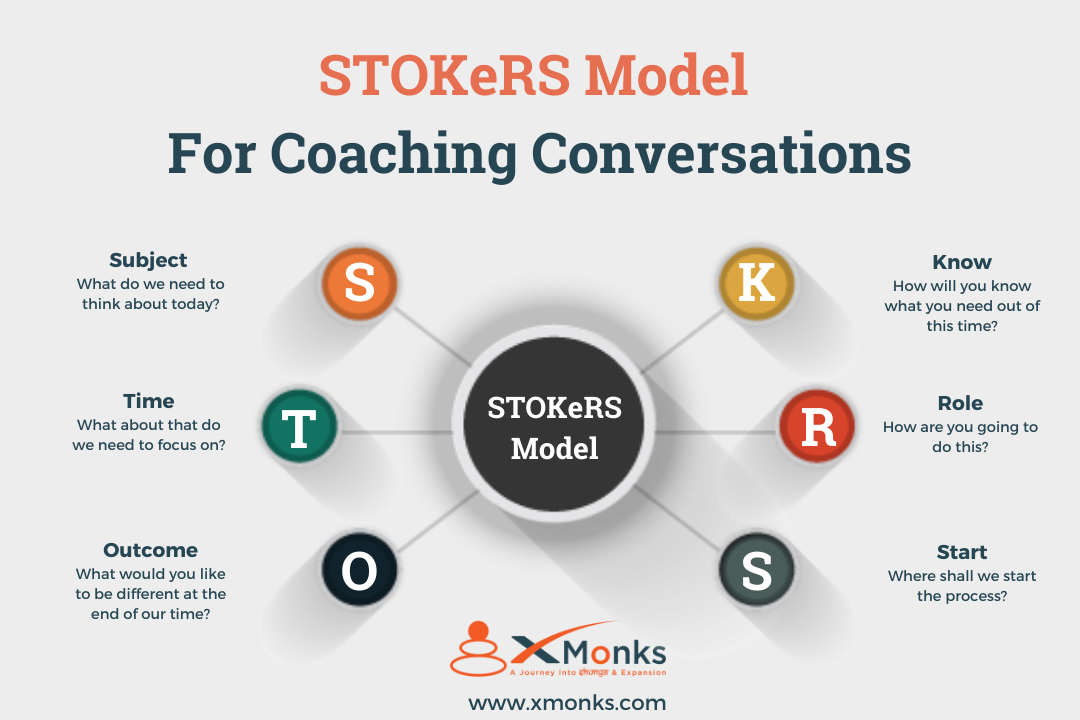 How to co-create that container for coaching conversations?

Using the ICF core competencies here is a model to build the container. We call it the STOKeRS model. Each alphabet sets a question that helps in co-creating the container.

Coaching is of no value until it facilitates and enables the people we are working with to do good thinking. To understand whether or not your coaching sessions are achieving this, you need to evaluate and answer two questions upon listening to a coaching session:

This also helps you know about the success of your partnership.

“Be unconditionally positive about time.”