Work can make you sick – and work can make you happy. Depending on who you are, what you do, and how you are treated at work, one of these things is deemed to happen. And the fact that we spend the majority of our awake hours at work makes this even a bigger concern.

How often have you come back from work, only to snap at somebody who did not even make a mistake? Or let me make it easier, how many times have you yammered at your colleague or your subordinate only to vent out the anger and the frustration caused by board room meeting. You see, it’s a pattern, like a trickle-down effect. But I only used this reference to bring light to the fact that for centuries we have been ignoring our psychological well-being at the workplace.

Getting Started With The Definition of Psychological Well-Being

Well, I feel that the study of well-being has been structured like a lighthearted Hollywood romantic comedy. The young lovers “meet cute” in ancient Greece. But when psychology became experimental in the nineteenth century, their relationship came to an end due to irreconcilable differences. Each one leaves the other alone, sadder, and unaware of how important the other was to their accomplishment. Will the star-crossed lovers keep acting foolishly and carrying on with their lone struggles? Or, will they come to an amicable agreement, come together spectacularly, with music growing in the background?

Fine, enough. Apologies, I know I’m just a sucker for the Hollywood endings. You see, the secret to getting the Hollywood ending, to resolving the stalemate for the philosophers and finding a secure foundation for the psychologists, is right under your nose. In fact, it was at the very beginning of this blog. Work can make you sick – and work can make you happy. Confusing, is it? (I meant it metaphorically, in a work context)

The point is that a major component of psychological well-being is having rewarding work that offers an opportunity to feel accomplishment on a daily basis, involves positive connections with coworkers, provides joy at work, and is gratifying. With reference to my happy ending, it is the amalgamation of both philosophers and psychologists.

However, it is crucial to clarify that psychological well-being (PWB) is not the same as several other often used phrases, such as “work satisfaction” or “motivation.” Job satisfaction refers to how content someone is with their current position. While this is undoubtedly a factor in psychological well-being (PWB), it is also entirely possible for someone to be content with their current position while being extremely dissatisfied with their relationships with some coworkers or the standard of management and supervision they receive. The same is true for motivation. A work task may excite me and motivate me to work hard on it because I believe it is important and I don’t want to let anyone down, but the burden and lack of resources may irritate and depress me. PWB is more or less the same as being happy at work.

Causes And Components of Psychological Well-being

Although important for overall psychological well-being, subjective well-being is insufficient on its own. To see why this is so, imagine winning a lottery. For the majority of individuals, that would be really fun for a week or two, but just think if you could do it forever! There aren’t many people who would find that possibility appealing. There may be such a thing as having too much of a good thing. This example demonstrates that in addition to experiencing great feelings, in order to feel good truly, we also need to have a sense of meaning and purpose.

A happy life is essential to psychological well-being. It consists of having a positive attitude and performing well. The experience of painful emotions (such as disappointment, failure, or sadness) is a natural part of life, and being able to control these unpleasant or painful emotions is crucial for long-term well-being. Therefore, sustained well-being does not require people always to feel happy. Negative emotions that are severe or persistent that interfere with a person’s capacity to operate in daily life jeopardise psychological well-being. Feeling good refers to a variety of emotions, including interest, engagement, confidence, and affection, in addition to the good feelings of happiness and contentment.

Given the potential advantages of higher levels of psychological well-being (PWB), it is intriguing and quite crucial to examine what factors affect PWB levels. There is a straightforward response to this question, as there is for the majority of psychological variables, at the most fundamental level of analysis: it is influenced by a combination of genetics and environment. The PWB genetic influences appear to be routed through personality traits. In other words, our personalities help determine PWB and our personalities help determine our genetic make-up. 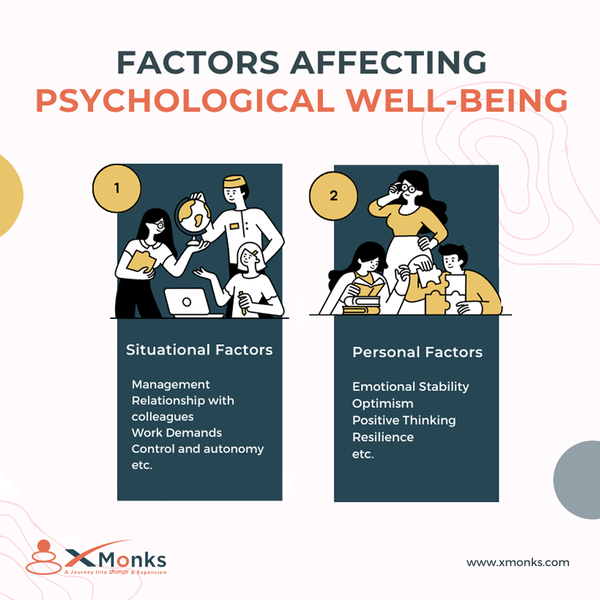 A good life largely depends on context for the vast majority of the living world. Most species tend to do well, or at least to succeed in their terms, given the correct circumstances and a healthy dose of luck: that’s essentially how they’re wired. On the other hand, if a typical species is placed in the incorrect environment, good luck or not, it would likely perish quickly. And if not perish then at least be psychologically unwell.

The vast majority of places on Earth are “the incorrect environment” for life, if not the majority of living forms. Not so, it would appear, for Homo sapiens, a species that is so versatile that its individuals may thrive almost everywhere, most likely even in outer space. This isn’t because they are difficult to eradicate, unlike rats and cockroaches, but rather because they are intelligent. Despite being quite physically dependent, these tropical primates have a remarkable ability at modifying their surroundings to suit their needs.

This makes it more relevant for us sapiens to work actively towards improving our psychological well-being. PWB has an effect on the entire company, and a deliberate strategy is necessary to fully capitalise on the advantages of high levels of psychological well-being. All organisations must separate into different functional roles and structures. Without doing so, performance would be ineffective.

Human Resources, Occupational Health, and Health and Safety are an organization’s three main functional areas that connect to PWB. All three of these functional areas must perform well together in order for well-being interventions to be truly effective.

This partnership can only be truly successful if the company approaches PWB strategically. High levels of psychological well-being may have significant advantages, but unless a business adopts a strategic approach, these advantages may not be fully realised. The simple explanation for this is that high PWB has advantages across numerous functional domains. Psychological well-being, for instance, can improve people management, sickness-absence rates, and performance and productivity.

A coach uses Integrative body-mind training (IBMT) which involves systematic training of attention and self-control while helping the client maintain an attitude of acceptance and openness to the current experiences. It shares many elements with other types of mindfulness training wherein the coach allows the coachee to share a space of acceptance that promotes and creates a space of psychological well-being.

There has been some indirect evidence suggesting that affective processing can be affected by modulating brain responses to emotion-related stimuli, a quality that is frequently enhanced by mindfulness training (Frewen et al., 2010; Brown et al., 2013). Given the small sample size of most neuroimaging studies of mindfulness training, it can be difficult to link changes in brain activity and functional connectivity to altered behavioral outcomes. However, some encouraging results have shown that brain structural changes are linked to better behavioral outcomes.

In the end, quoting myself again, Work can make you sick – and work can make you happy. Depending on who you are, what you do, and how you are treated at work, one of these things is deemed to happen. What you can do is eliminate the first part and adopt the second part so that you allow yourself to take the high road and step into the psychological well-being that you require for yourself. Unlike my romantic comedy, don’t be the star-crossed lover who keeps acting foolishly and carrying on with their lone struggles rather just pave your path and build on your success.

Previous
Mastering the Art of Asking Questions in Coaching
Next
Productivity Hacks: 7 Ways To Be More Productive At Work