Embracing Emotions as a Leader

Embracing Emotions as a Leader

The tendency to be emotional is part of who we are as humans. This functionality cannot be switched off. Not even the emotions at work. Being a leader is not the only concept of making people follow you. We know Hitler was one of the leaders too and he did make a history. Not many essays on leadership talk about it, but Emotional Intelligence is the most important skill of a leader.

Embracing emotions is only possible when a leader is well-versed with the term Emotional Intelligence. Emotional intelligence (EQ) is an expertise. It requires the ability to identify, appreciate and control our own emotions. It’s also the ability to recognise, understand and influence the emotions of others. Individuals with high EQ appear to be less anxious and interact more than their low EQ peers because they empathise with others and control their responses to their own and others’ emotions.

The mantra to attain the core understanding of Emotional Intelligence is to say “I need to understand how I feel, but also who to tell how I feel.”

Contrary to conventional thinking, there’s not one common type of emotional intelligence. Daniel Goleman, the author of the groundbreaking book Emotional Intelligence, breaks EQ down into 4 components:

Researchers Vipin Mittal and Ekta Sindhu agree with Goleman’s assertions. Their study, Emotional Intelligence and Leadership, concludes that a high EQ differentiates an elite and successful leader from a mediocre one. Mittal and Sindhu found that great managers were self-aware, empathetic, open-minded, and ambitious. They could manage complex social dynamics including, handling a bad supervisor and disciplining an employee, while retaining high team morale. 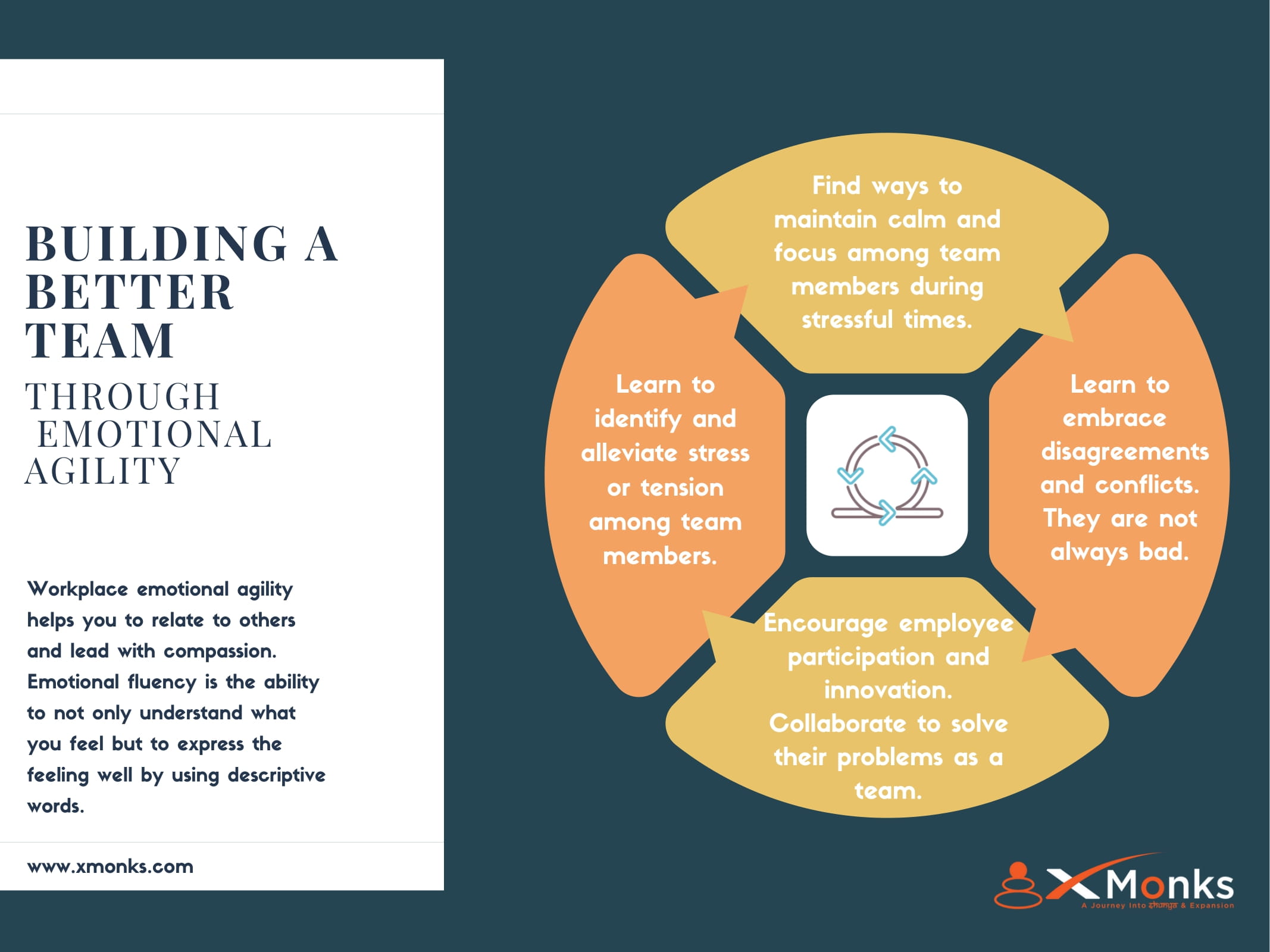 One of the most negative lessons we are taught is that, on one hand, you have emotion and, on the other, logic and reason. Emotions can be very logical in fact. So, while you might think that taking your emotions out of the decision-making process is advantageous, now is the time to start accepting that they add a lot of value instead.

Workplace emotional agility helps you to relate to others and lead with compassion. Furthermore, emotional fluency is the ability to not only understand what you feel, but to express the feeling well by using descriptive words.

The researchers didn’t just clarify how leaders express their high EQs. The pitfalls of high emotional intelligence were also exposed, and how it can impair leadership capabilities.

It is possible to think of the way we express emotion as a spectrum from less emotional to more emotive. It’s important to remember there is no right or standard level of emotional expression—it’s different for everyone, and can also be affected by one’s culture, industry, and work environment.

Sharing some emotion helps us connect and builds trust, especially for leaders, but sharing too much emotion at an inappropriate time and place can undermine a leader’s credibility.  The corporate term for this is Selective Vulnerability.

Hang to this space as we further talk about finding a good balance in the amount of emotion you share at work by understanding selective vulnerability.

Why is it important to embrace emotions?

All of our feelings, even the most complex ones, are significant. They inculcate in us a sense of self-awareness. Also the ones that are annoying or uncomfortable serve some purpose. You can better understand your feelings and, by consequence, yourself when you embrace emotions.

Emotional intelligence is a skill that can be learned. It necessarily involves the ability to identify, understand, and regulate our own feelings. It also includes the capacity to recognize, comprehend, and affect others’ emotions.

How does emotional intelligence affect leaders?

A leader’s most valuable attribute is Emotional Intelligence. It’s the capacity to identify, grasp, and affect other people’s feelings. Since they feel empathy with others and monitor their reactions to their own and others’ feelings, leaders with high EQ tend to be much less nervous and communicate more than their low EQ colleagues.

How can you build a better team through Emotional Agility?

Emotional agility in the organization enables you to connect to others and lead with empathy. Furthermore, emotional proficiency refers to the capacity to not only comprehend but also to articulate your feelings using descriptive words

Previous
Creating Space for your Clients as a Coach
Next
Do you know your why?