When Mein Kamph was made available to the public decades after being banned, it became a best seller across the globe. Speaking about the struggles of Hitler, the book stayed on top for years. It became an academic mandate for different disciplines.

Everyone was curious to know what led to the becoming of the cruelest leader in history.

Hitler led a catastrophic movement during his time. His propaganda was basically to use FEAR. He was a man with a broad vision and always believed in his decisions. His personality was a summation of various audacious qualities and he used all his qualities in his leadership activities. He was an excellent orator, a brave soldier, and a great leader.

In his autobiography, Mein Kampf, conflict defined most of Hitler’s relationships. Time and forward that become his view of authority. His idea was that a great authoritarian leader must lead the German race in its fight for survival and purify it from harmful influences.

After his release in 1926, Hitler led the Nazi party with his dazzling charisma.

Hitler was known for setting very high standards not only for himself but also for his followers. He was what the modern world would call a “perfectionist”. Although some of his goals were very farfetched for instance the Nazi army was ordered to invade other nations in a short period of time. It is a positive characteristic of a leader. He is the perfect example of an autocratic leader. His case will help us know what comes in the package under this class of leadership.

WHAT IS THE CONCEPT OF AUTOCRATIC LEADERSHIP?

Autocratic leadership, also known as authoritarian leadership, is simply described as a system in which there is one explicitly defined “boss” at the top who controls the majority, if not all, of the workload and duty distribution.

Democratic leadership balances the decision-making responsibility between the group and the leader.

If you know something about democratic leadership, you know that it sounds better than autocratic, and there are several surveys that show that workers and team members favour this approach. So, why would you ever take a stance that is in direct opposition to that?

BENEFITS THAT COME WITH AUTOCRATIC LEADERSHIP

Let’s be clear: there’s a reason why autocratic leadership persists. It’s not a coincidence or a misfortune.

Many organisations all over the world have embraced autocratic leadership. It would be naive not to understand the reasons why autocracy has found a footing in the business world over time.

So, when does an organisation become autocratic? When a company’s back is against the wall and they need to produce results fast, regardless of the process, it’s usually the last resort.

But why is this the case? Why do we instinctively gravitate toward a hardline leadership style like autocracy when it comes to producing results? Is autocratic rule a guarantee of success? Is it possible that business owners have been doing it wrong for a long time?

This style of leadership has been studied by many educational institutions.

According to the paper The Positive Effect of Authoritarian Leadership on Employee Performance: The Moderating Role of Power Distance, they proposed that authoritarian leadership would enhance employee performance based on the following reasons.

Thus, when a specific goal is set for employees, goal attainment provides them with an objective, unambiguous basis for evaluating the effectiveness of their performance. Although authoritarian leaders exercise tight control and unquestioned submission, the underlying reason is to promote followers’ performance.

Therefore, we expect to observe a positive relationship between authoritarian leadership and employee performance.

When we consider the characteristics of an autocratic leader, we can see that they build a solid framework within the organisation, with clearly defined positions and clear direction for all. Great – it’s important for employees to have a clear understanding of the company’s structure and a common goal toward which everyone is working.

Since there is one consistent focal point at the top where decisions are taken, an autocratic leader would establish clear lines of communication. Let me caution you, however, that this is not the same as establishing communication channels. Despite the fact that these lines have been drawn, an autocratic leader discourages free and truthful contact. Giving contact a specific path may potentially discourage it, which is a common occurrence in companies.

In other words, if you’re considering autocratic leadership as a management strategy for your business, you’re looking for someone who will crack the whip with little to no concern for the well-being of your employees.

If it wasn’t obvious already, this is not a leadership style that anyone would recommend, particularly in difficult times. If you want to get the most out of your squad, no matter what, you must cultivate them into producing the results you desire.

So, we’ve discussed why you may be considering appointing an autocratic leader, but what is the real truth about such a strategy?

Workloads are usually well-structured and carefully organised. As a result, qualities like creativity and innovation are discouraged in the workplace, and workers are told to carry out their responsibilities exactly as they are written, leaving no space for them to develop or contribute ideas to the company.

Represented by The Leadership Circle’s 360-degree profile, it connects a well-researched battery of competencies with the underlying and motivating habits of thought. The LCP is the only instrument that measures the two primary leadership domains – Creative Competencies and Reactive Tendencies.

An autocratic leadership style shares most of the competencies of an effective leader.

3. PROTECTING summary dimension measures the belief that the leader can protect himself/herself and establish a sense of worth through withdrawal, remaining distant, hidden, aloof, cynical, superior, and/or rational. It is composed of:

We discussed the potential of autocratic leadership to clearly identify contact lines in the workplace, but the trade-off is that you end up inhibiting communication across the board. Just because the teams know who to talk to doesn’t mean they’ll do so.

Let us put it out clearly: this is not a criticism of an autocratic leader’s personality; rather, it is an observation of the efficacy and impact of establishing an autocratic framework. Many autocratic leaders care about their employees’ advancement and growth, but they are constrained by the system in which they work. 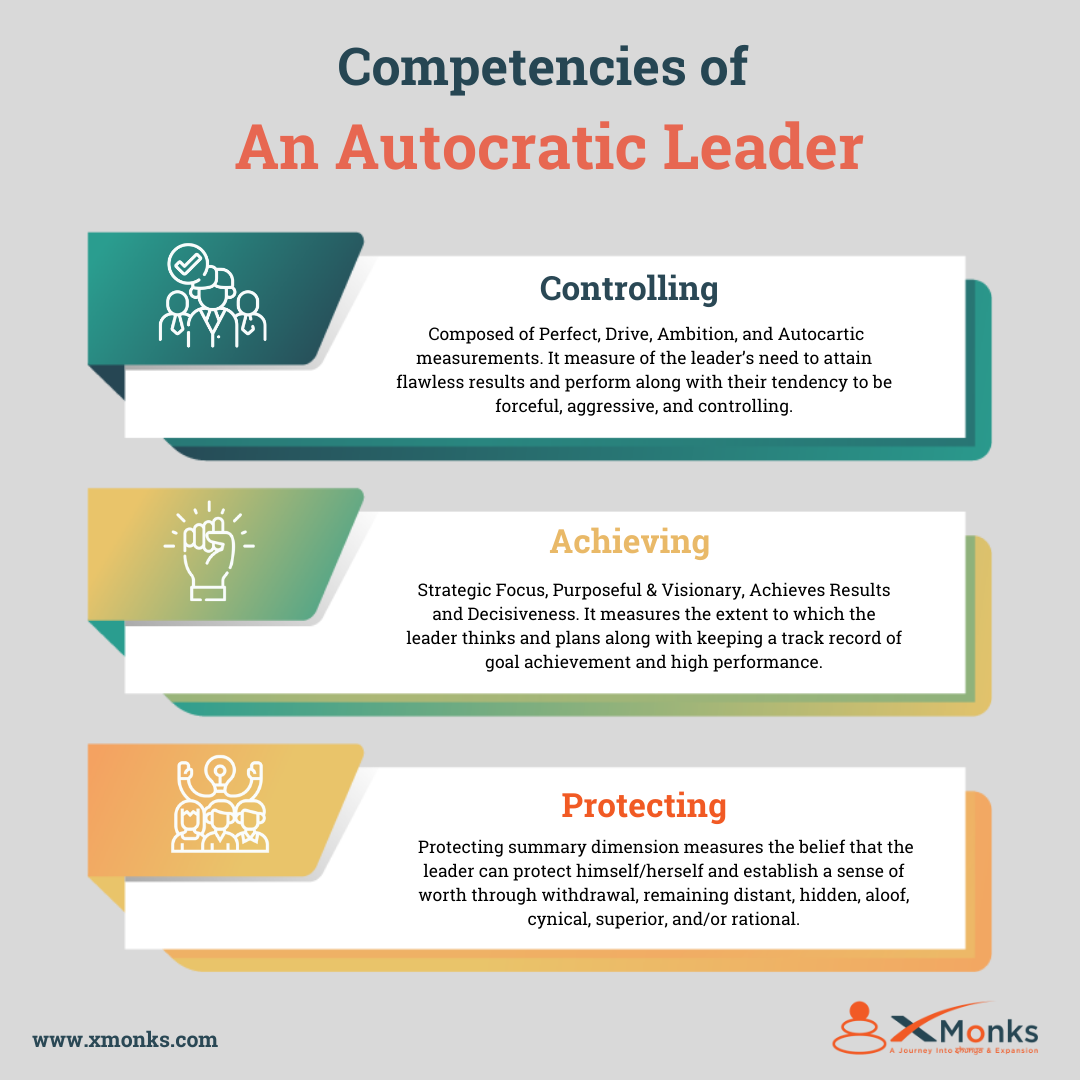 What exactly is a leadership style?

A leader’s signature actions when directing, encouraging, guiding, and handling groups of people are referred to as their leadership style.

What is the concept of autocratic leadership style?

Autocratic leadership, also known as authoritarian leadership, is clearly characterised as a system in which the majority, if not all, of the workload and duty distribution is controlled by one centrally defined “boss” at the top.

What are the advantages of Autocratic Leadership Style?

The term “authoritarian leadership” refers to a leader who holds complete authority. One of the advantages of using Autocratic leadership style is that authoritarian leaders instruct their followers what to do and expect them to follow through. This style can work well under time constraints, allowing the leader to make a fast decision and provide clear guidance to the group.

What does it mean to be an autocratic leader?

An autocratic leader is someone who rules with an iron fist, or someone who behaves like a dictator.

What does autocratic leadership mean?

Autocratic leadership is a management style in which one person makes all of the decisions with little feedback from other members of the community.

Leadership Styles for a Leader

Leadership Styles for a Leader to Understand