Countless meetings, deadlines, and after-work email check-ins can make it exceedingly tough for a leader to maintain optimal mental health, but it’s vital if leaders want to succeed in their organisation and like what they’re doing at the same time!

Good mental health is without a doubt crucial for everyone and leaders play an important role in ensuring the mental health of employees in the workplace.

Leaders direct the flow of work and establish the goals and expectations that must be met by others. Unrealistic expectations, heavy workloads, and tight deadlines all add to stress and compel employees to work longer hours for little pay. To put it another way, leaders have the ability to set the tone for good mental health in the workplace.

If you’re a CEO or other upper-level executive, you know very well that time, pressure, and demands can reap all of the energy you have if you let it.

Why do leaders go through a nervous breakdown?

Leadership is a difficult job that necessitates a great deal of sacrifice, and CEOs are sometimes considered as heroes or gods to be worshipped.

This way of thinking keeps CEOs under pressure to be superhuman and hide their vulnerabilities and issues behind closed doors, which can have disastrous implications. When the cameras aren’t rolling, though, the job’s great constraints and the psychological extremes required to get there begin to show.

Dr.  Daniel K. Hall-Flavin, M.D. of Mayoclinic writes that people sometimes use the term “nervous breakdown” to describe a stressful situation in which they are temporarily unable to function normally in daily life. When life’s obligations become physically and emotionally burdensome, it’s thought to happen. The phrase was once widely used to describe a wide range of mental illnesses, but it is no longer used by mental health experts.

According to Finds LifeWay and Focus on the Family, over one-quarter of pastors (23%) admit to having “personally struggled with mental illness,” with half of those pastors stating that the disease has been diagnosed.

(Compare that to the U.S. population in general, where only 7% report themselves as depressed.)

According to a Vistage (an international organisation for CEOs) poll, all 2,400 CEOs who participated said they were stressed. External factors, such as an uncertain economy, might cause CEO stress. Your body and mind might also contribute to CEO stress. While stress can be a tremendous motivator, it can also stifle critical thinking and creativity, which are essential for leadership. Stress induced nervous breakdown can have a negative impact on your mental, physical, and emotional health. Learning how to manage CEO stress and handle nervous breakdowns is an aspect in learning how to be a CEO to some level.

Nervous breakdown isn’t a medical phrase, and it doesn’t refer to any particular mental condition. However, this does not imply that it is a typical or healthy stress reaction. What some individuals refer to as a nervous breakdown could be a sign of an underlying mental health issue that needs to be addressed, such as nervous breakdown, depression, or anxiety.

A nervous breakdown in a leader is common; for example, he or she may be:

A nervous breakdown might manifest itself in a variety of other strange or abnormal behaviours.

Why Has There Been a Neglect in Leaders’ Mental Health?

In general, leaders are not viewed as people exhibiting  an outburst or displaying emotional responses. It is more likely seen as displeasing if a leader is not firm and not in control. Well, we do not promote any taboo regarding mental breakdowns. However, there are a couple of arguments as to why there is a considerable neglect of a leader’s mental health.

However, we believe that the most logical reason for leaders’ mental health at work being neglected is not whether they genuinely have better mental health or not, but how their well-being is viewed by others, including researchers.

Two different hypotheses point to how followers and the general public see leaders and leadership in this regard.

Employees, coworkers, and subordinates, on the other hand, are regularly identified as vulnerable to mental and physical sickness, according to recent qualitative findings (Cloutier & Barling, 2016). These views may be shared by scholars in the field, which may explain why there has been so little empirical research on leaders’ mental health.

Causes of Nervous Breakdown in the C-Suite

In addition to the obstacles faced by lower-level employees, many executives believe they confront additional challenges as a result of their high-ranking position:

In today’s world, an executive post typically mixes the fear of not delivering with increasing expectations, as well as heightened scrutiny from social media and the general public. Corporate leaders are under more stress than ever before as a result of the pandemic and the rapid move to remote employment. In other words, the stakes are high.

Both a leader’s health and family life can suffer as a result of being in the C-suite. This has an impact not just on the individual at home, but also on how they present themselves at work, which has an impact on employees and the entire organisation. Indeed, a nervous breakdown in the C-suite can affect your judgement and decision-making, as well as cause delays in execution, but it can also spread throughout the organisation. Your mental breakdown, stress, worry, or depression might have a significant impact on your upper management and their reports. 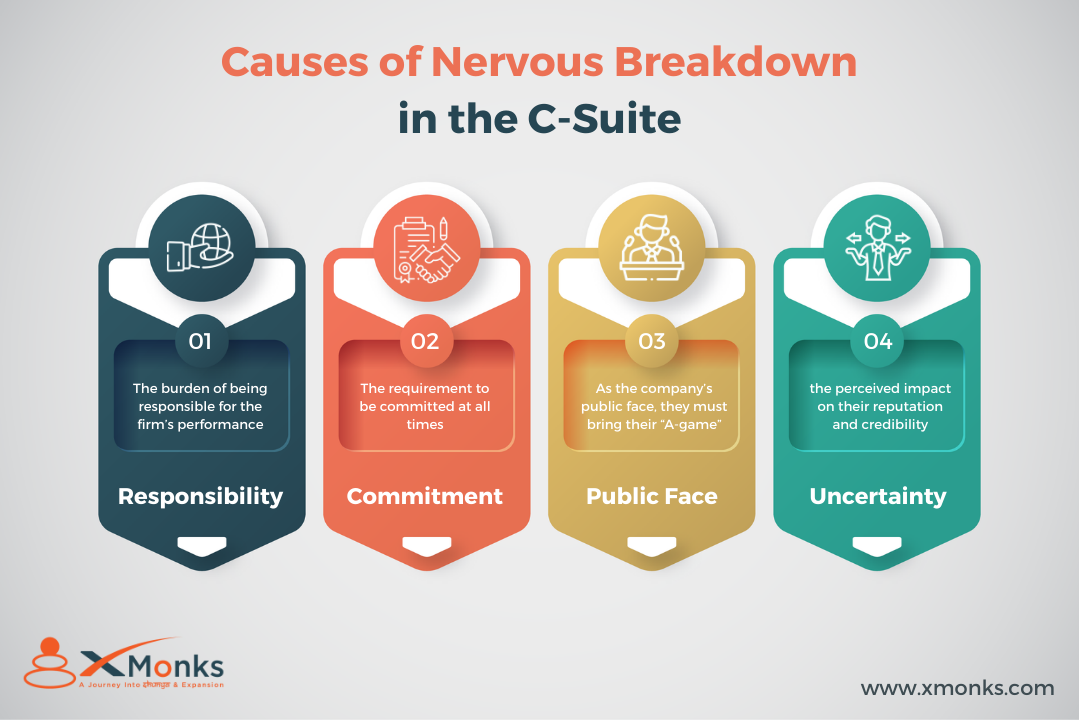 How Executives Can Address Mental Health

Good mental health can improve your personal and professional lives, as well as produce better business outcomes and promote job satisfaction. Here are some suggestions to help you start improving your mental health.

1. Break the myth that ‘self-indulgence = success.’

The path to the C-suite is marked by hard effort and even sacrifice (and even the daily reality for many executives). We live in a ‘more-is-better’ society, with news stories about Elon Musk’s 120-hour work weeks and other CEOs bragging about their lack of sleep.

Excessive work hours, missing family events, getting less sleep, binge eating, and working on vacations are not and should not be considered badges of honour. Rather, practise self-care and the exquisite art of strategic slacking off. Schedule little breaks to do things you enjoy in the remote work world of almost-constant Zoom meetings: watch a humorous video, have a snack, go for a stroll, play with your dog. You can obtain greater focus and clarity and, as a result, be more productive and effective in your work when you are less worried and weary.

The stigma attached to seeking help is one of the factors that deters CEOs from doing so. As a C-level executive, you may find that your peer network is quite small. In fact, being at the top may be extremely lonely. According to a Stanford Graduate School of Business study, approximately two-thirds of CEOs suffer from loneliness. When you’re feeling stressed, reach out to trusted relatives, friends, and coworkers for support. Alternatively, try joining a CEO support group, which is a non-judgmental, non-competitive group of trusted peers who can connect to your issues and frustrations, provide criticism, offer guidance, and keep you accountable.

3.Talk to a professional

You wouldn’t refuse assistance if you broke your limb or suffered a heart attack, would you? Speaking with a neutral third party can help provide clarity and direction. They can also assist you in evaluating your symptoms and coming up with a treatment plan that is right for you.

Remember that a nervous breakdown isn’t a deficiency in your character, a sign of weakness, or a reflection of your managerial abilities. Taking actions to improve your mental health is also not something to be ashamed of. You have worked hard to achieve success as a C-suite executive. Failure to handle your nervous breakdown, stress, anxiety, depression, or other difficulties could jeopardise your hard-won profession. You also want to set a positive example for your staff and build a precedent for mental health acceptance in the workplace.

Due to particular life circumstances, being in the public eye, or other factors, executives are more likely to develop emotional, relational, and psychological difficulties. Executive and life coaching, as well as private couples retreats, can assist alleviate or increase mental health concerns such as anxiety, depression, nervous breakdown, or burnout, as opposed to more exterior issues such as personal/professional relationship breakdowns.

Don’t wait until you’re in a crisis to seek help! Seek assistance as soon as possible. 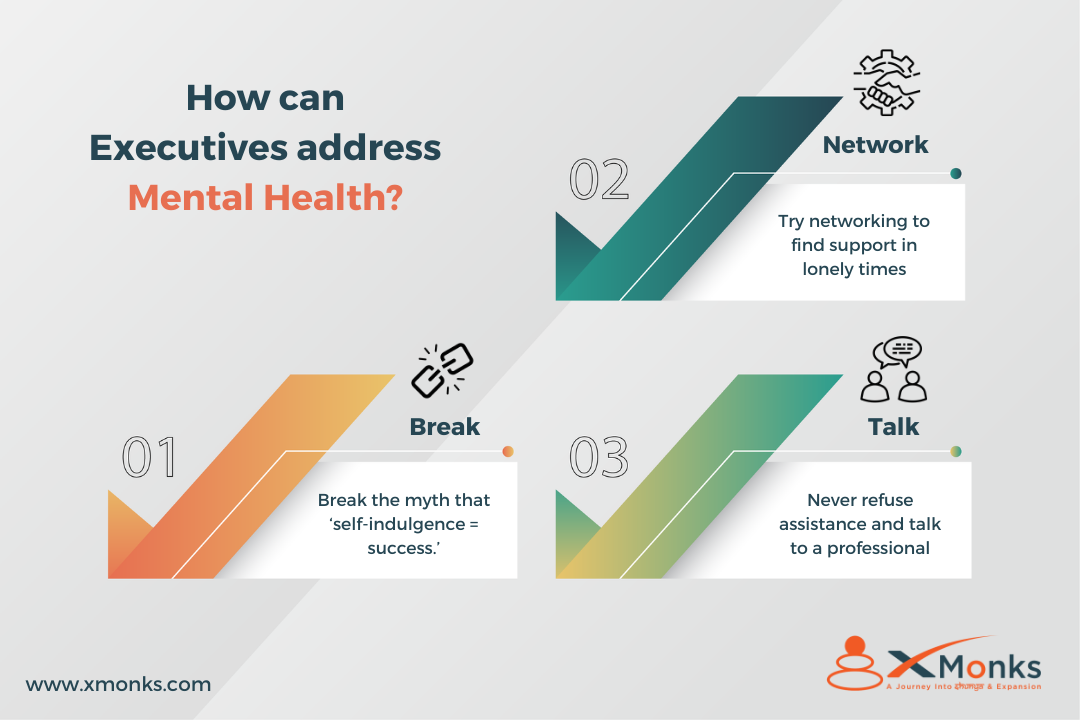 Why do leaders go through a nervous breakdown?

CEOs are sometimes regarded as heroes or gods to be revered because leadership is a demanding job that requires a tremendous lot of sacrifice. This way of thinking puts pressure on CEOs to be superhuman and bury their flaws and troubles behind closed doors, which can have terrible consequences.

What are the symptoms of a nervous breakdown?

The signs and symptoms of a nervous breakdown vary from person to person, depending on the underlying cause. It’s usually believed to mean that a person is no longer able to function on a regular basis. A leader’s nervous breakdown is typical; for instance, he or she may: Call in ill for days or weeks at a period.

Having difficulty adhering to proper eating, sleeping, and hygiene habits.

Why has there been neglect in leaders’ Mental Health?

We argue that the most reasonable reason for leaders’ mental health at work being disregarded is not whether they have better mental health or not, but how others, including researchers, perceive their well-being.

What are the causes of nervous breakdown in the C-Suite?

The responsibility of being responsible for the firm’s performance, previous and present employees, and the company’s customers/clients

The need to be “bulletproof,” fully devoted, and prepared at all times.

They must always bring their “A-game” and be effective in whatever they do as the company’s public face.

How can executives address Mental Health?

Good mental health can benefit both your personal and professional lives, as well as boost business results and increase job happiness. Here are some ideas to get you started on the road to better mental health.

8 Leaders Who Came Out of Mental Crisis

Mental Wellbeing in the Workplace

Previous
Scale It Up
Next
How to build your influence and build Communities?