Schools taught us similar subjects. Same teachers, same syllabus, same duration. But, all of us did not learn the same. Why is it? Why does this happen? Since it is a matter of our own consciousness, we do have psychology to back us up.

When we learn new skills, we experience different emotions at different stages of the learning process. At the beginning, we may not realize how much we need to learn. Then, when we discover what we don’t know about a subject, we may get disheartened, and we might even give up.

Recognizing how we feel at each stage of the learning process can help us manage these emotional ups and downs.

Understanding the Conscious Competence Ladder can help you to know where you stand in learning a new skill. In this article, we will explore how you can use it to learn new skills more effectively.

Origin of The Conscious Competence Ladder

Noel Burch developed the four stages of competence while working for Gordon Training International in the 1970s. It’s worth noting that this concept was originally applied to the psychology of learning in general, rather than to learning or teaching a language.

Numerous elements, such as assisting someone in “knowing what they don’t know” or recognising a blind spot, can be compared to certain elements of a Johari window, though Johari is concerned with self-awareness, whereas the four stages of competence are concerned with learning stages.

At its heart, the concept is based on the premise that individuals begin the learning process completely unaware of how little knowledge they possess about a subject. We must ‘unlearn what we have learned’ and accept our fundamental incompetence before we can construct a solid framework of competency on top of it.

Relationship Between Consciousness and Competence Ladder

This tool views the learning process as a ladder with various rungs that one can climb as they progress along their learning path. The concept is straightforward: the higher one climbs the ladder, the greater mastery one gains over a particular skill.

The Ladder of Learning’s various levels are quantified using two indicators: consciousness and skill level. Consider these two parameters to be the wood that goes into the construction of the ladder.

The Four Stages of Competence

According to the model, we move through the following levels as we build competence in a new skill:

Unconsciously unskilled – We don’t know that we don’t have this skill, or that we need to learn it.

Consciously unskilled – We know that we don’t have this skill.

Consciously skilled– We know that we have this skill.

Unconsciously skilled – We don’t know that we have this skill, but we don’t focus on it because it’s so easy.

At the start of your learning journey, you lack a particular skill and are unaware of it. This unconsciously makes you unskilled, which is the first rung on the ladder.

Suppose you are learning to design. Given you had never previously designed. You may have been unaware that designing was a necessary skill for your line of work. You would have been unconsciously unprepared for designing at that point in your career.

Once you recognise that you lack a skill, you become conscious of the need to acquire it. This is how you advance one rung on the ladder: by being Consciously Unskilled.

If you’ve identified designing as a skill you lack and need to improve, you’ve reached this stage. You decide to improve this ability and search for online designing courses, which will assist you in climbing to the next rung.

After ascending the first two rungs of the ladder, you begin to acquire the skill. With practise, you’ll gradually feel as though you’re grasping the skill. You begin to notice improvements. You have now reached the rung of Consciously Skilled.

Now you’ve begun applying your newfound knowledge to your work assignments after completing an online course on designing. You notice a noticeable improvement in the quality of your designing. You understand that with sufficient time, concentration, and effort, you will be able to design effective books and documents that will satisfy your manager. You’ve ascended to the third rung of the Learning Ladder. However, your journey does not stop there. 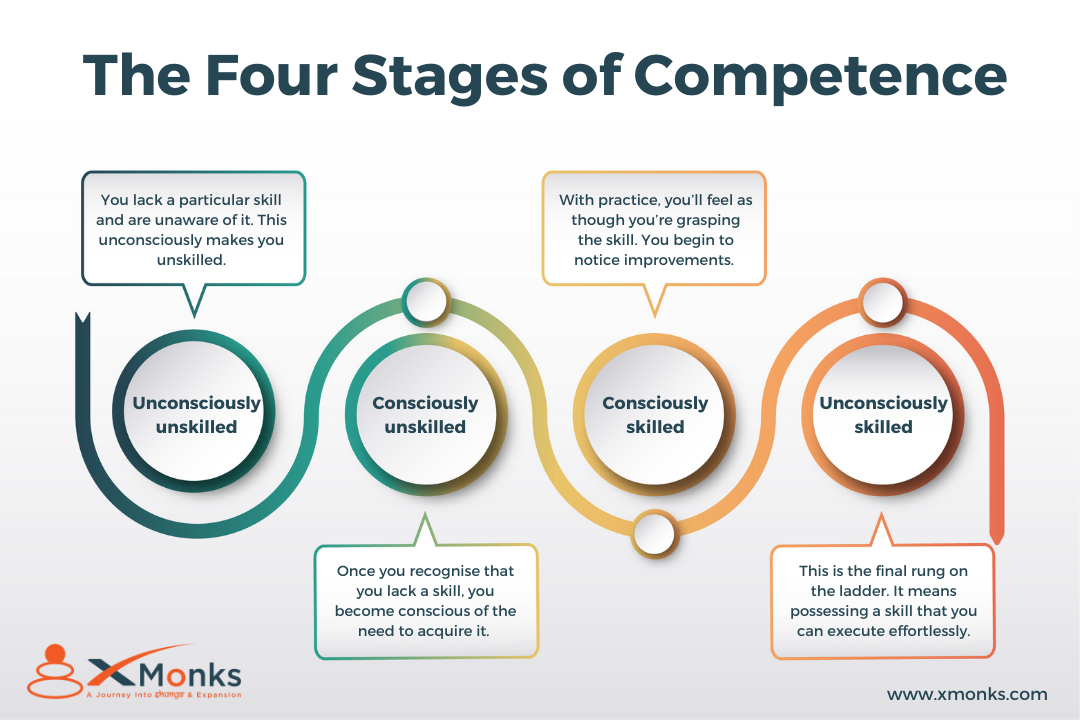 This is the final rung on the ladder. Simply put, it means possessing a skill that you can execute effortlessly. Following extensive practise, you ascend the Ladder of Learning and achieve mastery of the skill.

To conclude the designing example, you’ve now made numerous projects and honed your ability to the point where designing an excellent project comes almost naturally to you. This is the ladder’s fourth and final rung.

The capacity to acquire new skills is critical for career advancement. It assists you in diversifying your job opportunities and provides you with the tools necessary to stay current in this rapidly changing world. And, perhaps most importantly, constantly expanding your skill set will enable you to maximise your potential. Now that you can track your progress using the Conscious Competence Ladder of Learning, mastering a new skill has never been easier.

Consciousness is all about being aware of yourself. This awareness can help an individual to make a shift, to grow and to expand. Making a shift is all we are talking about at The Coaching Conclave 2021. This September, Raise Consciousness Through Coaching. Be a part of A Journey Into Shunya and Expansion.

Awaken: A Journey to Purpose, Wholeness and Healing

Decoding The Essence of Life

Decoding The Essence of Life Through Our Existence

The True Essence of Awareness

The Law of Pure Potentiality

Living By The Law of Pure Potentiality

Exploring the Undefinable- Being, Love, and Consciousness

Previous
5 Ways to be fully present and make a positive difference in the world
Next
Coaching Chronicles: Raghavan Veera