The world today is transitioning from traditional management style of command and control which can often stifle potential. Leaders and managers prefer incorporating coaching leadership mindsets and behaviours, synthesizing them to create the highest performing type of leadership entirely based on unlocking and enabling potential.

Now to bridge that gap it is necessary that a match between coaching style and client is established to harness client success, and this article will highlight some of the major types of styles. In doing so, individuals and organizations seeking a life or leadership coach will be better able to find the right person for the job.

The Helix of Coaching Style and Leadership

According to Hall et al. (1999), leaders who receive coaching are more likely to be goal and relationship oriented and provide more guidance than managers who do not receive coaching. Moreover, they have more interest in learning, improved self-awareness and a higher degree of personal  development.

“Leader–coaches” are leaders who take a coaching approach. They help their employees develop self-confidence and self-responsibility by giving them choices wherever feasible, while still providing a good balance of support and challenge.

A competent coaching leader allows his staff to operate independently while also ensuring that they are supported and engaged in their work. Furthermore, if the results of the coaching sessions indicate that the person will be unable to be their greatest self in the organisation, the leader may need to train the individual to leave.

Henson (2013) goes on to say that a Coaching Leadership Style boosts confidence, increases individual competency, and aids in the development of a strong commitment to common goals. Leaders also work to enhance and strengthen their own leadership abilities. Managers, for example, employ self-coaching to solve their own difficulties. Managers that use the Coaching Leadership Style have more confidence and self-control as a result. Another effect is that these leaders appear to deal with stress better (Henson, 2013).

Coaching certainly has an impact on a leader’s profile, but does it also enrich the soft skills of a leader?

Managers must have a “coaching mindset” and believe in their ability to fulfil the coaching leader position in order to succeed with a Coaching Leadership Style. They must also possess specialised talents and abilities in order to complete the task.

Ellinger and Bostrom (2002) claim that leaders that use a Coaching Leadership Style are more likely to succeed.

The coaching mindset of a leader is built on these concepts and attitudes.

Coaching Leadership Style entails assisting employees in their growth and development, whereas management entails telling them what to do. While management style entails making decisions, telling others what to do, coordinating and controlling, coaching leadership style entails listening, assisting, supporting, developing, removing obstacles, and empowering others.

Hunt and Weintraub (2002) suggest that managers should transition between Coaching Leadership Style and Command Leadership Style because conditions vary and necessitate different leadership styles. Leaders who succeed, according to Cox, think they have the abilities and experience to coach their people.

They believe they have self-efficacy and the necessary abilities to build trust and positive relationships with their staff. Most importantly, these leaders genuinely care about their staff and want to assist them in achieving their goals. They place a strong emphasis on learning as a vital component of coaching.

So how does each leadership coaching style work?

A Look at Coaching Leadership Styles

Self-awareness, self-regulation, motivation, empathy, and social competence are among the emotional intelligence characteristics that the most successful leaders possess (Goleman 2000). According to Goleman, there are six primary leadership styles (2000). Each needs a distinct level of emotional intelligence and has a varied influence on the organisation. 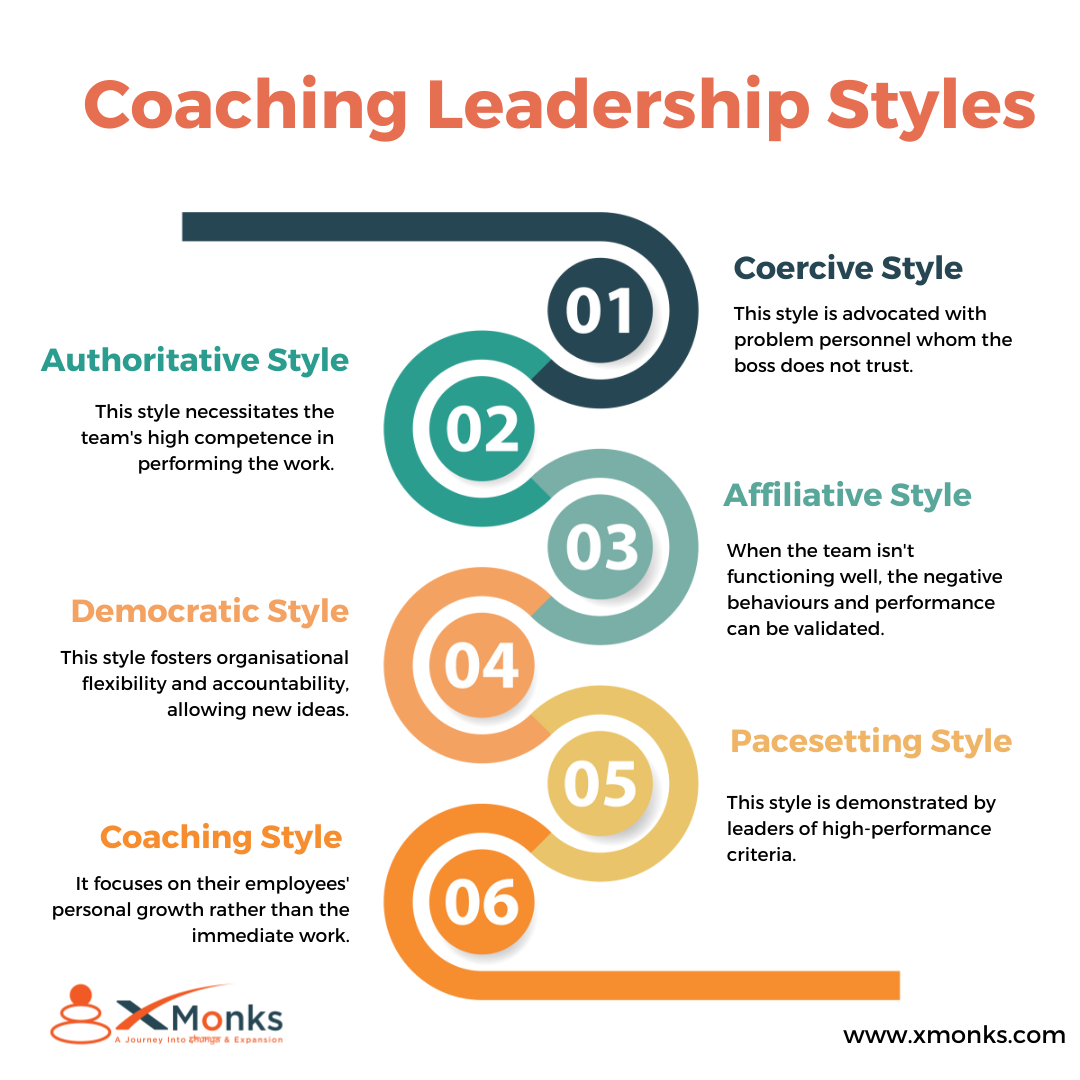 The Coercive Style or “Do what I say”

This technique is beneficial in difficult situations where a plan must be carried out exactly as planned. This leadership style is frequently advocated for usage in crisis situations or with problem personnel who the boss does not trust. Any control an individual has over their job is taken away by this sort of leadership. As a result, in the incorrect circumstances, employees’ motivation and sense of ownership, responsibility, and accountability for the job product can suffer.

The Authoritative Style or “Come with me”

This strategy lays out the general aim while allowing people to take their own path to get there. This leadership style frequently necessitates the team’s high competence in performing the work and the leadership’s best grasp of the outcome. When the leader lacks the same degree of experience as the team, or when the team has expert-level knowledge in defining the outcome that the leader lacks, this style will not be as effective.

When the goal is to improve team harmony or morale, this attitude is the most effective. This leadership style places a premium on praising. When the team isn’t functioning well, the negative behaviours and performance can be validated.

The Democratic Style or “People choose”

Individuals in the organisation have a say in choices using this method. When used appropriately, this leadership style fosters organisational flexibility and accountability, allowing for the generation of new and innovative ideas. Endless meetings and confused staff that feel leaderless and want a clear vision and strategy to function are typically the price of this.

The Pacesetting Style or “Lead by example”

This strategy is typically demonstrated by leaders who establish high performance criteria and model how to achieve those standards. Employees regard their boss as self-motivated and highly capable, and this approach has an usually good impact. When this type of leadership is overused, however, it can overwhelm employees who notice a larger difference between their own performance and that of their leaders. Furthermore, this leadership style necessitates the leader’s constant presence with the staff, which may cause the employees to resent the leader for taking over and not allowing them to complete the work in their own way.

The Coaching Style or “Bring your best self”

When a leader takes this approach, he or she focuses on their employees’ personal growth rather than the immediate work at hand. This leadership style produces a very favourable interaction between the leader and the employee when individuals have the proper autonomy and competencies to perform their job and are motivated in growing themselves to deliver greater results. This style is typically not suggested for very junior or problem employees, who would benefit more from the Pacesetting or Coercive methods until they attain a minimal level of skill and independence in their work.

To summarise, a coaching leadership style is an excellent way to both develop a leader’s emotional intelligence and create a meaningful relationship between the leader and their staff. Although it takes time and work to develop this approach, the benefits to the leader are well worth the time and effort.

When looking for the greatest coach for your team, it may appear that difficult decisions must be made, but this is not the case. Most coaches don’t specialise in just one type of leadership training. Due to personal experience, they tend to mix diverse approaches and match their own ideology to form their coaching process.

How many Coaching Leadership Styles are there?

How is a Coaching Leader different from a coach?

A coaching leader differs from a coach. A leader who uses a coaching leadership style may hold coaching-type conversations with his or her employees in order to improve their performance, qualities, and competencies so that they can perform better in their present or future roles in the organisation. The coaching leader should have a vision for the employee, and he or she will have one on a regular basis.

Who is a good Coaching Leader?

A good coaching leader allows his team to work freely while also supporting and engaging them in their task. If the findings of the coaching sessions show that the person will not be able to be their best self in the organisation, the leader may need to prepare the person to depart.

What does the Coaching style of Leadership entail?

What is a coaching Mindset built upon?

The coaching mindset of a leader is built on these concepts and attitudes. To succeed with a Coaching Leadership Style, managers must have a “coaching mindset” and believe in their capacity to fulfill the coaching leader role.

How Emotional Intelligence Makes You A Better Leader

Leading With Love: Why Love is the heart of Leadership