Home » Blog » Are You Sleeping Well: Link Between Your Mental Health and Sleep

There’s a big number of people getting into the practice of Revenge Bedtime Procrastination.

Sad for the working class, that is when they find themselves their ‘me time’.

It’s also known as sleep procrastination, and it means you’re getting “revenge” for your busy daytime schedule by cramming leisure time into your schedule at the expense of sleep.

Researchers aren’t unfamiliar with the concept of sleep procrastination, but the revenge angle is. It is said to be derived from the Chinese word “bàofùxng áoyè,” which has gained popularity on social media and roughly translates to “retaliatory staying up late” or “revenge nighttime procrastination.”

It’s possible that you’re a night owl attempting to survive in an early bird’s world. Perhaps you’re looking for a quick way to de-stress after a long day. Perhaps you procrastinate on a regular basis, meaning you put off crucial tasks. Sleep procrastination has also been linked to a lack of self-control, which you may have less of as the day progresses.

It was defined by researchers in the Netherlands in 2014 as failing to go to bed at the scheduled hour without being prevented by external factors. It affects people who actively deny themselves sleep at night, no matter how fatigued they are.

Even if you believe you are maximising your time by working from your bed, you may be jeopardising your physical and mental health.

Common Symptoms and Effects of Lack of Sleep

Sleep deprivation can have a negative impact on everything from your relationships to your ability to drive safely. You may also have the following symptoms in addition to being tired: 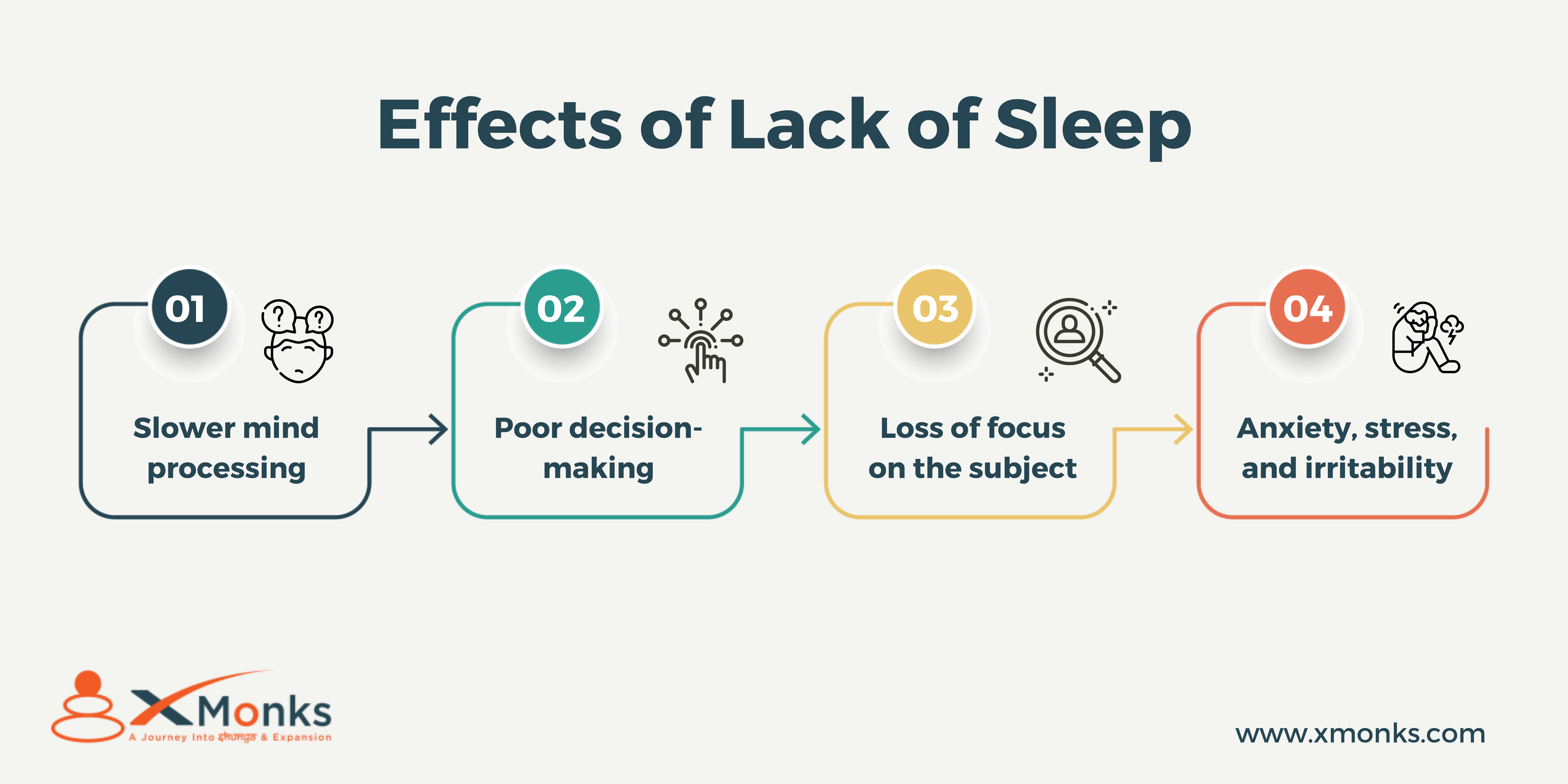 A Good Sleeper is A Good Leader

Sleep is, in fact, the foundation of effective leadership. Not only that, but as a leader, your sleep has a direct impact on your team’s performance.

The science is clear: if you want to be a better leader of a higher-performing team, you need to start with sleep.

Despite extensive studies on the link between sleep deprivation and effective leadership, too few leaders make sleep a priority. According to the Center for Creative Leadership’s international research in 2017, 42% of executives get six or fewer hours of sleep every night.

Why does your lack of sleep affect your leadership abilities?

The quality of leadership behaviour is based on the brain’s executive functions, which are a series of higher-order cognitive processes. Problem solving, reasoning, organising, inhibiting, planning, and executing plans are some of these skills. Executive functioning is directed by the prefrontal cortex of the brain, which is mostly responsible for the expression of leadership behaviours. While other regions of the brain can manage with sleep deprivation, neuroscientists have discovered that the prefrontal cortex can’t.

Basic vision and motor skills, for example, which are controlled by the occipital and cerebellar lobes of the brain, deteriorate when sleep is neglected, but not nearly as much as higher-order mental functions.

Leadership quality does not remain relatively constant, contrary to popular belief. Bosses aren’t just nice or evil, they’re both. Individual behaviour can change substantially from one day to the next, and even week to week. What’s the most common cause of this discrepancy in relation to sleep deprivation?

Well, we have a neat list of reasons for why sleep is a must. 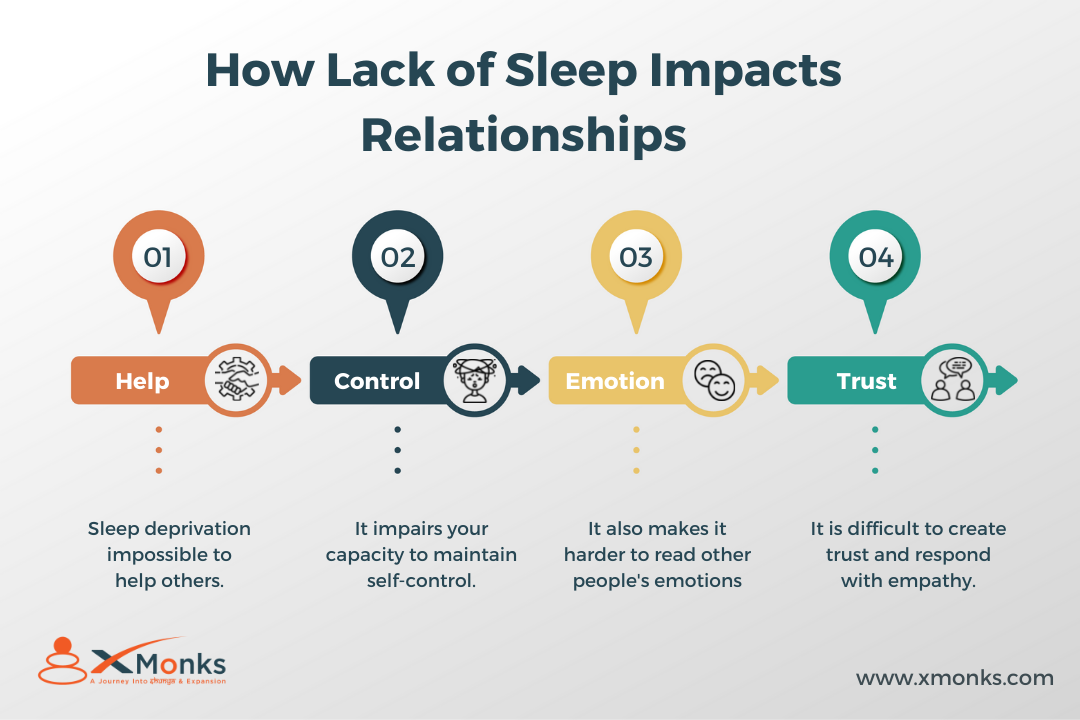 Leaders that are supportive are aware of and sensitive to the feelings of others (McKinsey). They motivate and help colleagues overcome problems by demonstrating honesty and genuine interest in those around them.

All of these actions are aided by sleep, which reduces activity in the amygdala (the subcortical brain structure responsible for emotional processing) in response to previously experienced emotional stimuli. Simply put, sleep clears your mind of the tensions of the day before, allowing you to better focus on helping others.

Sleep deprivation, on the other hand, makes it nearly impossible to help others. For starters, you’ve probably felt angry after a bad night’s sleep.

Sleep deprivation impairs your capacity to maintain self-control and makes you more inclined to overreact, expressing your emotions in a more unpleasant manner and tone of voice. Sleep deprivation also makes it harder to read other people’s emotions, whether through facial expressions or voice tone. It’s difficult to create trust and respond with empathy when you don’t get enough sleep.

Christopher Barnes, an organisational behaviour researcher, conducted a two-week survey of 88 leaders and their workers and discovered that when bosses slept badly, they were more likely to engage in abusive behaviour the next day.

(Research: Your Abusive Boss Is Probably an Insomniac)

In keeping with our human inability to evaluate how sleep deprived we are, managers may be similarly unaware of how their sleep-deficient behaviour is affecting relationships with their subordinates, according to a study. Barnes conducted a further study in which he monitored the sleep patterns of 40 managers and their 120 direct reports throughout the first three months of their assigned time together, as well as the quality of their boss-employee interactions.

Sleep-deprived leaders were more impatient, irritated, and aggressive, resulting in strained relationships, according to his team. The researchers expected this impact to fade away as people became more acquainted, but it did not. Worst of all, these drowsy leaders were utterly oblivious to the unfavourable dynamic that continued throughout the three-month trial.

Lack of Sleep Deteriorates Your Ability to Inspire Your Team

Aside from patience and a level head, another important aspect of helping your team is encouraging them, especially during difficult times. It’s concerning, though, because in one study, leaders’ perceived charisma plummeted by 13% when they lost just two hours of sleep.

Direct reports feel pleased and consider their employers as charismatic when they see their leaders displaying positive emotion.

Basic visual and motor skills deteriorate when people are deprived of sleep, but not nearly to the same extent as higher-order mental skills.

Lack of Sleep Reflects in Your Leadership

Leaders who undervalue the need for sleep can have a negative impact on their teams’ emotions as well as their behaviour. “The emotional dysfunction experienced by sleep-deprived individuals can be ‘transmitted’ to well-rested persons who come into contact with an under-slept individual,” Barnes says.

Remember Barnes’ study of 88 bosses and their subordinates? With the supervisors’ harsh behaviour came a lack of participation from their teams, which was not entirely surprising.

However, through what Barnes refers to as “sleep devaluation,” leaders can indirectly undermine team performance.

Consider a scenario in which a boss brags about obtaining only a few hours of sleep, sends work emails in the middle of the night, or praises workers who work late nights. Employees are aware of these signals and adjust their conduct as a result.

Subordinates of leaders who model and encourage poor sleeping habits receive roughly 25 minutes less sleep per night than those whose bosses appreciate sleep. They also claim that the quality of their sleep has deteriorated.

This is a significant problem with cascading repercussions. We’ve already explored how devastating untreated sleep debt can be to your direct reports’ focus and productivity.

An even more concerning twist is that a manager’s disregard for sleep might lead to staff behaving unethically, possibly as a result of what appears to be a high-pressure work environment, as well as impaired moral judgement and decision-making. Barnes’ earlier research has revealed that a lack of sleep is strongly linked to ethical failures.

Pass on these tips because getting adequate sleep is just as important for you as it is for your team. Also, keep in mind that your coworkers are watching you for clues about what’s essential in the office. Stop wearing sleep deprivation as a badge of honour, and if you absolutely must send a late-night email, use a delayed-delivery option to at least model good behaviour for your colleagues.

If you sleep less, you can surely fit in more job, hobby, friend, or relationship hours, but at what cost? A drop in the quality of your job, your emotional capacity, and your leadership skills.

You can also get help from a Health and Wellness Coach to build a better lifestyle for yourself.

Tips from a Wellness Coach to Get Enough Sleep

Don’t rely on caffeine and sweets to get you through the day. To get a good night’s sleep, follow these simple steps: 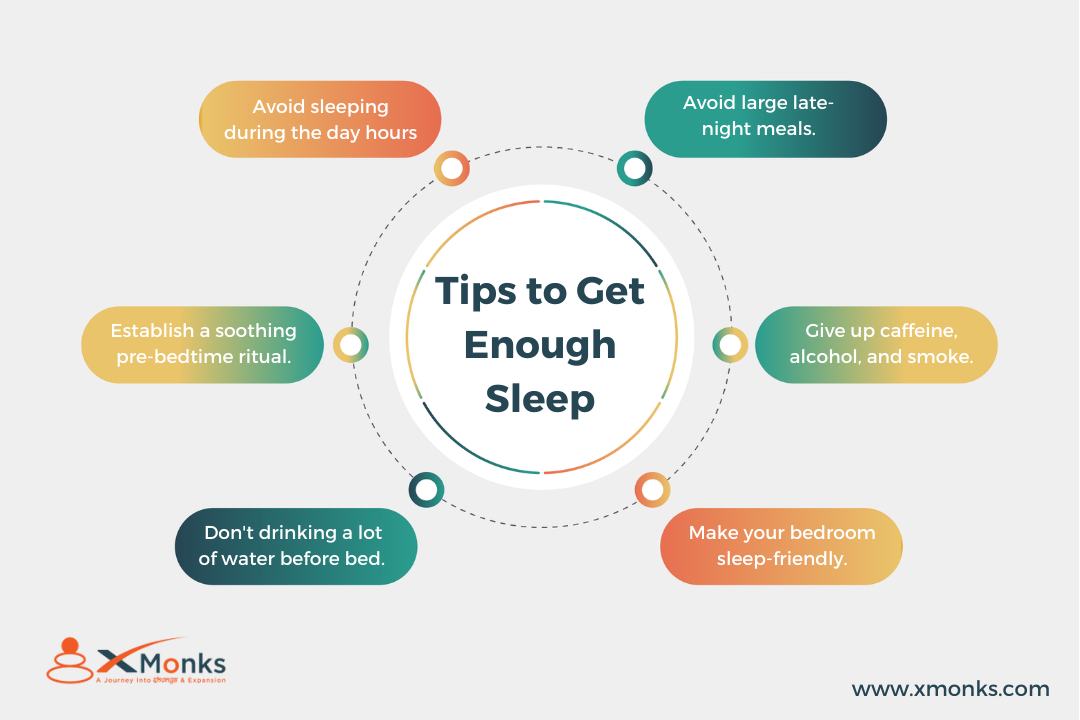 There is now a large body of evidence on the bi-directional relationship between sleep and stress: a lack of sleep creates heightened emotional reactivity, and the experience of stress results in bad quality of sleep.

In addition, poor sleep has been found to be a major predictor of reduced engagement at work. It’s time for organisations to find ways of countering the employee churn, lost productivity, and increased health care costs resulting from insufficient sleep.

You have the tips. You now know the associated effects of sleep deprivation. Take a break. (P.S. Hope you are not reading this at 2 a.m.)

What is the meaning of sleep procrastination?

Sleep procrastination involves cramming leisure time into your schedule at the price of sleep as “revenge” for your busy daytime routine. The concept of sleep procrastination isn’t new to researchers, but the revenge angle is. It’s supposed to be drawn from the Chinese word “bàofùxng áoyè,” which has garnered a lot of traction on social media and loosely translates to “retaliatory staying up late” or “revenge nighttime procrastination.”

What are the symptoms of Sleep deprivation?

Sleep deprivation can have a detrimental impact on your relationships as well as your ability to drive safely. In addition to being weary, you may experience the following symptoms:

Does lack of sleep affect your leadership abilities?

The executive functions of the brain, which are a set of higher-order cognitive processes, determine the quality of leadership behaviour. Some of these abilities include problem solving, thinking, organising, inhibiting, planning, and implementing plans. The prefrontal cortex of the brain controls executive function and is primarily responsible for the expression of leadership behaviours.

What are the negative impacts of Sleep deprivation?

Sleep deprivation reduces your ability to control your emotions and makes you more likely to overreact, expressing your feelings in a more unpleasant style and tone of voice. Sleep deprivation also makes it more difficult to read other people’s emotions, whether through their facial expressions or their tone of voice. When you don’t get enough sleep, it’s tough to build trust and respond with empathy.

How can a wellness coach help your Sleep deprivation?

Some of the ways a wellness coach help your Sleep deprivation are as follows:

Sleeping throughout the day is not recommended. If you absolutely must nap while the sun is up, keep it to 30 minutes or less and do it early in the day.

Create a relaxing pre-bedtime routine. Brush your teeth, read a book, and stretch your muscles gently. Make it a habit to do the same thing every night, whatever you do.

Late-night meals that are too large should be avoided.

The Procrastination-Perfectionism Loop: Why Most Perfectionists Handle Deadlines Poorly

Why is Time Management Important?