Adulting through Childhood Trauma: From A Coach’s Lens

Home » Blog » Adulting through Childhood Trauma: From A Coach’s Lens

Childhood experiences are formative in shaping the life trajectory of an individual, given the fundamental cognitive, social and physical growth that occurs during the early years of life. We will build empathy for them if we adopt a trauma-informed lens to view our clients. Stop responding to their reaction and then become curious about ways in which we can help them in healing and creating more resilient and versatile learning and life responses. Here are some quick facts about adults survivors of child abuse:

30% of adults report being physically abused as a child.

21% of adults report being sexually abused as a child.

11% of adults report being emotionally abused as a child.

If a child has been exposed to, witnessed, or experienced abuse there is another linked surety that adults may have also ignored that person–both  mentally or physically. This suggests that a child will be exposed to the effects of trauma as an adult, if they grow in a traumatic environment.

The prevalence of childhood trauma is widespread and multifaceted which has been shown to have long-term detrimental effects in clinical populations. Yet there is a lack of these facts and communal understanding in communities for the effects of childhood trauma.

Why should trauma impact matter to coaches, trainers or leaders?

As designers and facilitators of learning in higher education, in the workplace, or in change efforts with social service consumers, it is critical to coaching practice to understand the broad impact of trauma on the brain and its wide reach across the diverse array of adult learners we serve. As grim as the trauma news is, the brain has enormous capacity for repair and healing (Ross, 2006). There are many good things we can do to design learning environments and activities to help calm the fires of reactivity and support healing and learning (Perry, 2006). First, we must understand the impact of trauma on the brain.

For instance, if you grew up in an unsafe environment in which a parent became violent when using alcohol or drugs, your survival depended upon your ability to watch that parent closely for signs that trouble was coming so that you could protect yourself by running away (flight) or fighting back (fight).

Young children are often powerless to do either. So their mind works to protect what the body is forced to endure. Thus, the third adaptive response harnessed by a child in a frightening situation is to freeze or disassociate – to mentally vacate the body to survive the traumatic event.While these responses were crucial to the child’s ability to survive in development, they became cognitive distortions responses in the peaks and troughs of an essentially non-threatening adulthood.

How do these trauma-driven brain changes impact the adult learner?

Due to the physical changes in the brain, the trauma-impacted adult moves through life in a state of persistent anxiety and hypervigilance. He is always on the lookout for danger and is hypersensitive to changes in the voice, body posture and facial expressions of others because those are the early warning signs that he’s relied on to stay safe in unsafe situations (Perry, 2006).

Because the trauma-impacted adult is reactive to minor cues or changes in the facial expressions, body postures and voice tone of others, he is exquisitely aware of and absorbed with the process of tracking those cues, even in a learning environment. 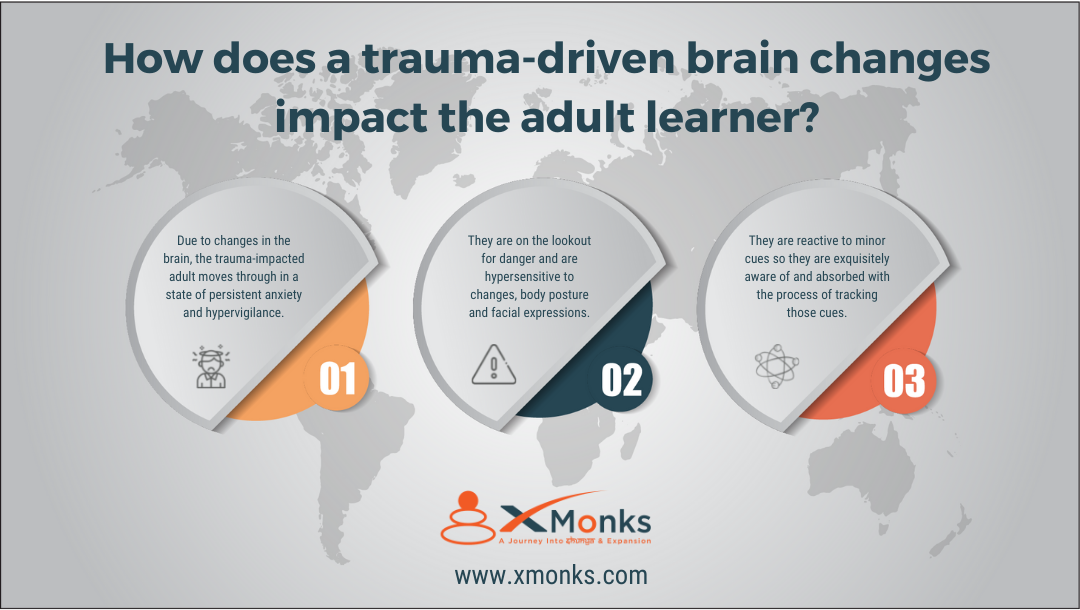 Childhood trauma adds to the the risk of future trauma

While traumatic events can happen to anyone, you’re more likely to be traumatized by an event if you’re already under a heavy stress load, have recently suffered a series of losses, or have been traumatized before. Especially, if the earlier trauma occurred in childhood. Childhood trauma can result from anything that disrupts a child’s sense of safety, including:

Experiencing trauma in childhood can result in a severe and long-lasting effect. When childhood trauma is not resolved, a sense of fear and helplessness carries over into adulthood, setting the stage for further trauma. However, even if your trauma happened many years ago, there are steps you can take to overcome the pain, learn to trust and connect to others again, and regain your sense of emotional balance.